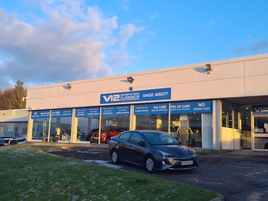 A 20% rise in revenues at multi-site used car dealer V12 Sports And Classics in 2021 was outpaced by a rocketing 63% increase in operating profits, accounts filed at Companies House this month show.

V12 Sports And Classics, whose headquarters is in Hinckley, Leicestershire, is among the 20 largest independent car dealers in the UK and it achieved a new record turnover of £177.4 million in 2021.

That figure means it has almost trebled its revenues in five years from the £60.1m it achieved in 2016.

V12 Sports And Classics owner Farhad Tailor said in the accounts it was "a very positive result given the backdrop of a challenging economic environment and the COVID pandemic".

He revealed that employee numbers had decreased in 2021 from an average of 195 to 157, mainly due to a pandemic-related restructuring undertaken in late 2020, but added that investment in staff is paramount and the group's in-house training department continues to give staff the best support possible.

Tailor hinted that expansion is still to come.

"The company's customer base is concentrated within the UK automotive industry and is subject to variations in the size of the UK used car market annually. However, the company's current and planned investment programme has provided the business with the capacity to look for sales opportunities in other UK markets," he said in the accounts.

In 2019 V12 Sports And Classics relocated its headquarters to London Road in Hinckley, including its call centre and centralised marketing, accounts, finance and customer service teams, and it invested further in its preparation centre at Rugby to create capacity for preparing up to 2,000 vehicles per month.

It also expanded its network of used car dealerships to eight sites during 2019 and 2020, including openings at Nelson in Lancashire, Luton in Hertfordshire, and Witham in Essex.