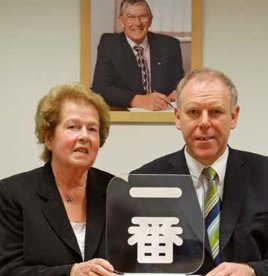 Tributes have been paid following the death last week of Elsie Brooks 60 years after she and husband Ron co-founded Ron Brooks Group, which has now represented Toyota for half a century.

Current group managing director Kevin Slack, her son-in-law, announced the sad news of the 92-year-old company director to staff at the East Midlands-based Toyota and Suzuki dealer group and later told AM: "She was a special lady with strong principles.

"She was hard working and continued to be dedicated to the Ron Brooks business following the death of Ron in 1998 and her daughter Julie in 1999 and relished the challenge of a woman working in the male dominated motor industry in the last 60 years.

"Her family was also very important to her with many working in the business over the years. She spent lots of time with her siblings and many nieces and nephews and leaves her two beloved grandsons, Tom and Joe.

"I am pleased she lived to see the business celebrate 60 years in business on June 30. She has left a great legacy.

"Thank you for everything you did for the business and rest in peace Elsie from all at Ron Brooks Motor Group."

Only a few weeks ago Ron Brooks celebrated its award of Toyota's Ichiban award for customer service, the brand's highest honour in Europe.

It welcomed Toyota GB's managing director Agustin Martin, operations director Mark Roden and customer services director Robin Giles to the business and held an event for staff and customers, with food vans, fairground games, entertainers and performances from Ilkeston Brass Band which the group has sponsored for more than 40 years.

Local MP Maggie Throup visited to congratulate the business on its award.

Elsie's grandson, Tom Slack, the group's manager of strategy and innovation, added: "We have won a string of awards even over the last few years, and our results speak for ourselves - we are proud of the foundations Mrs Brooks set for the business and the unrelenting focus on customer service and ‘doing the right thing’."

In 2021 Ron Brooks achieved a record year of trading, with a return on sales of 3.6%