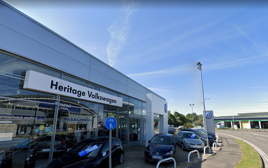 Heritage Automotive highlighted the role played by “much-improved margins” and reduced administrative expenses as it recorded a five-fold increase in pre-tax profits in 2021.

The Wiltshire-based AM100 car retail group succeeded in growing its turnover 3.9% from £169.5 million to £176.1m in the period to December 31, 2021 despite disposing of its Cheltenham Jaguar Land Rover (JLR) dealership to Marshall Motor Group.

An £823,000 reduction in administration expenses resulting from the transaction and its integration of the Blade Motor Group Skoda dealership into its existing Volkswagen dealership in Weston Super Mare, meanwhile, helped pre-tax profits grow from £534,000 in 2020 to £3.33m.

Its results statement said: “The directors are encouraged by the current progress and the commitment demonstrated by the Heritage team.

“The company continues to trade profitably, is well funded and will continue to capitalise on new business opportunities as they arise.”

The business has risen to the top half of the AM100 franchised dealer groups since acquiring Blade Group in 2019.

This year the group also became an franchisee of the Ineos Grenadier 4x4.