AM Awards 2017: Digital initiative of the year - Marshall Motor Group 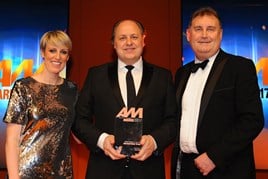 A man who discovered a lot about special moments in 2016 led by example to create a group-wide approach to social media that saw his business claim AM’s Digital Initiative Award.

Daksh Gupta, Marshall Motor Holdings’ chief executive, leapt from a plane flying at 13,000ft for a sky dive in aid of the BEN charity during the summer. Part of the ‘BEN challenge’, it raised more than £140,000 and was covered extensively on traditional and social media. Gupta has led from the front with Marshall’s social media presence too.

Sharing #marshallmoments is central to the group’s creation of an online community of customers. While few have been as hair-raising as Gupta’s own #marshallmoments in 2016, the hashtag allowed Marshall to make the most of vehicle handovers, stories from within the group and the brands it represents.

All direct tweets and customer concerns are answered seven days a week and followed up by directors or the “very customer-centric CEO”.

The “top-down” adoption of social media allows Marshall to reach a wider customer base than the visibility of the group’s 110 franchised sites.

With 27 Facebook pages and 24 separate Twitter accounts, Marshall believes it has the largest social coverage of any dealer group in the AM100.

Having sold a car first via Twitter in 2010, according to the group’s entry to this year’s Best Use of Social Media Award category, its online following now includes a reach of 51.5 million users on Facebook plus 6.4 million Twitter followers.

Despite its early social media sales success, Marshall said commercial concerns are not what drive its online presence. The group said: “MMG’s objective with social media is not to directly sell products or services. The objective is to showcase our company, our products, our services and people, our credibility and likeability.”