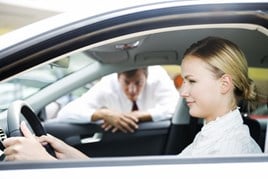 Analysis of the language used in 64,000 online reviews claims to have resulted in advice for car retailers dealing with female customers - suggesting 43% do not trust dealerships.

CDK Global used a natural language processing tool to gain insight into what customers really thought about their interaction with car retailers and found discrepancies between the response of men and women to the sales process.

The words “stressed”, “overwhelmed”, “taken advantage” and “panic” were among the top ten words used by women when reviewing their in-dealership experience, with many saying they felt “unsure” or “stupid” in their service and sales reviews.

“Not only do women make up a large percent of the buying population, they also influence even more car-buying decisions, which is why it’s so important for dealers to make sure they’re providing women with the right customer experience.”

The reviews analysed by CDK were separated by sales and service, and then further separated them by five-star and one- to two-star reviews.

The words used most commonly used by both men and women show that overall most people want the same thing, it said: “fair” treatment and “helpful” staff that leads them to ultimately leave “happy”.

For women, “compassion” and “compassionate” were among the most frequently used words in positive sales reviews, often with other adjectives like “kind” and “caring”.

To help guide dealerships, CDK Global’s experts used their study findings to compile some key advice designed to enhance the in-dealership experience for women. Among its key points were: