Personal contract hire (PCH) has grown from 5% to 7% of the market for new car finance for the 12 months to February 2016.

According to the latest figures from the Finance and Leasing Association (FLA), obtained by AM, PCH has grown at the expense of hire purchase, which has dropped from 21% to 16% over the same period.

PCH is a long term leasing option for customers not looking to buy their car at the end of the contract. The trend shows customers are becoming more accustomed to leasing their car, rather than owning it.

However, PCP is still the retail motor finance product of choice for new vehicles, increasing its share from 73% to now over three quarters of the market at 76%. 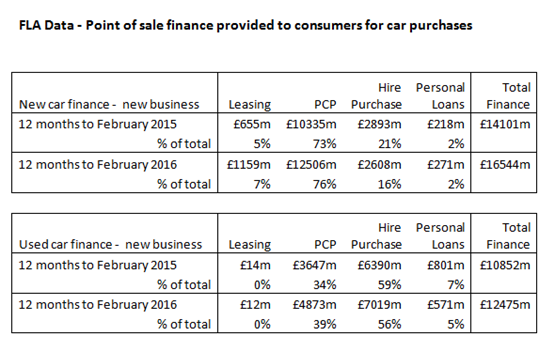 Used PCP finance is also starting to gain traction moving from 34% to a 39% share.

Nothard said: “In a market with rising used volumes, sustained levels of consumer demand are vital to the stability of the market.

“The growth of PCP in the used sector is helping to support demand. It is clear the ‘iphonification’ of motorists behaviour is a trend set to continue as motorists get more comfortable with a ‘cost to use’ over a ‘cost to drive’ model.”

Nothard said payments are now the purchase trigger, rather than a vehicle’s RRP, with younger generations changing from ownership to rental ­the 21st century ‘Radio Rentals’.

An FLA spokesman said then numbers further proove that motor finance continues to be a market which works well for customers.

He said: “Rates are highly competitive, and products like PCP match the broader culture-change which has seen consumers less focused on eventual ownership, and more keen to simply have a car to drive.”

There are now over 16,000 dealerships in the UK that have passed the FLA’s Specialist Automotive Finance (SAF) test, which aims to keep them up to date on how finance products work.

The FLA spokesman said: “Most of the larger dealership groups have achieved SAF Approved status, indicating that all of their customer-facing sales staff hold a current SAF certificate.”