Point of sale consumer new car finance business volumes fell by 8% in June, compared with the same month in 2016, according to new data published by Finance and Leasing Association.

A stamen issued by the FLA said that the value of new business was flat compared to the same period in 2016, however.

Geraldine Kilkelly, head of research and chief economist at the FLA, said: “The recent trends in the consumer new car finance market very much reflect those in private new car sales.

“In the first half of 2017, the POS consumer car finance market reported a fall in new business volumes of only 1%, which remains in line with industry expectations of a broadly stable picture for the year as a whole.”

The percentage of private new car sales financed by FLA members through the POS was 86.3% in the twelve months to June, unchanged compared with the same period to May.

The POS consumer used car finance market reported new business in June up 12% by value and 7% by volume, compared with the same month in 2016.

In the second quarter of 2017, this market reported new business up 9% by value and 4% by volume. 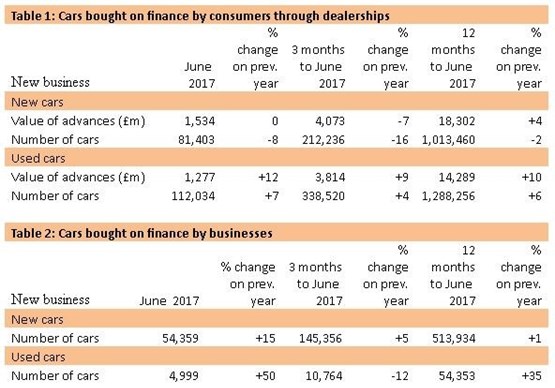