Point of sale new car finance rose by 2% in value but fell by 8% by volume in August, according to the latest figures published by the Finance and Leasing Association.

The value of new car finance business rose to £817m and despite the fall in volume to 45,728 financed new vehicles, growth was seen in the used car sector during August, the FLA reporting that new business in August up 8% by value (to £1.28bn) and 2% by volume (to 113,221), compared with the same month last year.

The percentage of private new car sales financed by FLA members through the POS held steady at 86% in the twelve months to August, meanwhile.

Commenting on the figures, Geraldine Kilkelly, head of research and chief economist at the FLA, said: “The August figures reported by the POS consumer new car finance market are in line with wider trends in private new car sales.

“These trends are not unexpected given the strength of the market in recent years and subdued consumer confidence about the general economic outlook.

“New business volumes in the POS consumer car finance market overall were stable in the first eight months of 2017 compared with the same period in 2016.” 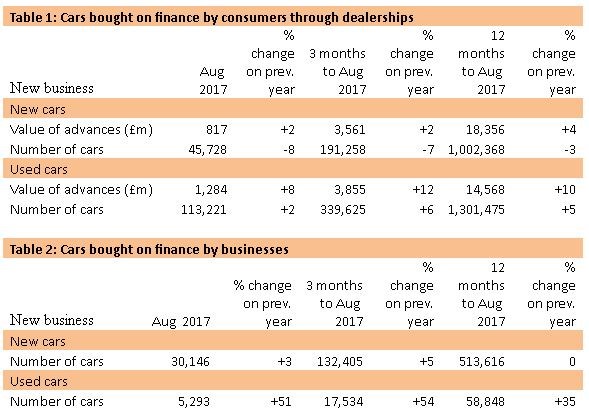 Online vs in-showroom finance – which one wins?

Online vs in-showroom finance – which one wins?