The Finance and Leasing Association’s (FLA) latest published figures showed that consumer car finance business volumes declined by 16% at the point of sale during September.

The decline on the same period during 2017 came with an accompanying 14% decline in the value of new business as new business fell 4% by value and 6% by volume overall in Q3 2018.

Once again, the introduction of the Worldwide Harmonised Light Vehicle Test Procedure (WLTP) on the new car market during September were highlighted as the key contributing factor to the decline.

Geraldine Kilkelly, head of research and chief economist at the FLA, said: “Recent trends in the POS consumer new car finance market have reflected those for private new car sales which have been affected by changes to emission standards introduced in September.

“The POS consumer car finance market overall reported new business volumes up by 3% in the first nine months of 2018, in-line with expectations of single-digit growth for the year as a whole.”

The FLA revealed that the percentage of private new car sales financed by FLA members through the POS was 90.9% in the 12 months to September 2018.

The POS consumer used car finance market reported new business in September up 9% by value and 3% by volume, compared with the same month in 2017. 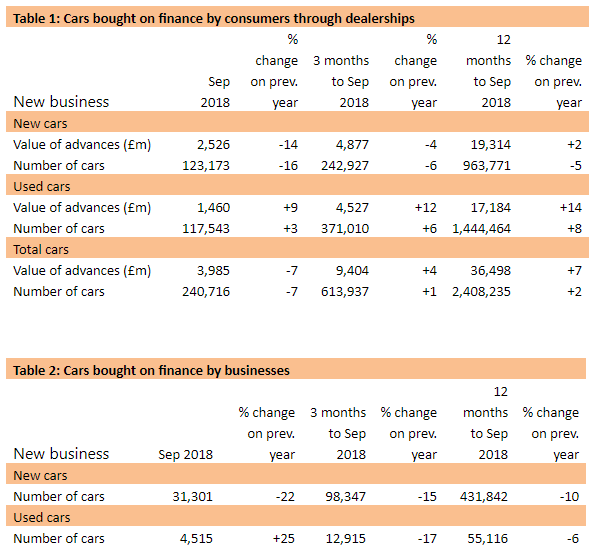