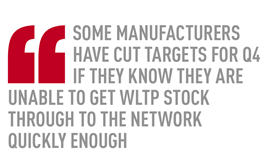 With September’s expected market drop out of the way, dealers can now concentrate on closing out the year positively as new WLTP stock arrives in showrooms over the next few months.

AM understands some manufacturers have cut targets for Q4 if they know they are unable to get WLTP stock through to the network quickly enough, so sales expectations have been reduced as a result.

While that Q4 bonus may be more achievable as a result, a reduced market means fewer opportunities for profit in other areas, such as finance.

Ford led the market by volume in September, but it still saw a 16.05% drop in registrations in the plate-change month, as well as a 12% drop YTD.

It has reset its strategy for Q4, with its representative examples showing fewer 0% deals, instead moving to a slightly higher rate of APR at 1.2% across about half of models. Importantly, those 0% deals are still there on the Ka, Fiesta, Focus and Ecosport – all big volume models that need to keep moving to keep dealers in profit. Both the Ka and Fiesta are available at £99 and £160 a month respectively to tempt customers in the run-up to Christmas.

Mitsubishi is a stand-out brand this year, managing to somehow navigate the stock shortages that have plagued other brands in September, with a 35.4% increase in registrations and a performance up 22.6% YTD.

A scan of the Japanese manufacturer’s representative examples for Q4 doesn’t reveal a link as to whether they have had a part to play in its success. The Eclipse Cross crossover stands out as it’s even cheaper than a Mirage city-car in Q4 at £114.53 a month, but that’s after a customer can find £7,016 for the deposit.

The deposit for Mitsubishi’s popular Outlander PHEV is cheaper, at £2,500, but that leads to a rather expensive monthly payment of nearly £600, well above the average of £315 from the data AM has collated for Q4 so far. Out of the examples in the table here, Mitsubishi has the highest rate of APR.

It’s interesting to note what happened to those manufacturers AM had been informed were struggling to homologate their vehicles in time for the WLTP deadline. Both Audi and Volkswagen struggled in September, with registrations down heavily by 55% and 53% respectively.

This could potentially be a positive in some ways for dealers as this hints that both brands did not force registrations of non-WLTP stock, so dealers will not be left with a glut of vehicles that will be difficult to shift over the next quarter.

Jaguar was another brand AM had heard was having trouble with getting WLTP stock through to its network, but by comparison its registrations increased by almost 20% in September.

There is strong support in place from Jaguar in Q4, with 0% offers on core models such as the XE and XF, as well as the E-Pace. The E-Pace is actually the most affordable model in Jaguar’s range this quarter at £299 a month after a £5,345 deposit.