The impact of the new WLTP vehicle emissions test regime on new vehicle supply has been laid bare by new car finance data published by the Finance and Leasing Association (FLA).

Market data for October showed that new business volumes in the point of sale (POS) consumer new car finance market remained stable in October (71,976) when compared with the same month in 2017, while the value of new business grew by 5% over the same period to £1.482bn.

But the FLA’s data for the three months to the end of October reflected the impact of WLTP new vehicle supplies.

Offering her insight into trends for the period, Geraldine Kilkelly, head of research and chief economist at the FLA, said: “The performance of the POS consumer new car finance market in October continued to reflect trends in private new car sales.

“The consumer car finance market overall remains on track to report single-digit new business volumes growth in 2018 as a whole.”

Used cars continued to be the boom business for car retailers during October.

Businesses were also turning to used cars as the WLTP impacted tax regimes as well as supply volumes.

Although starting from a relatively low base, the FLA's data showed that the number of used cars financed for business during October soared by 125% to 9,482, with an increase of 43% in volum (to 18,105) for the three months to the end of October.

The FLA reported that the percentage of private new car sales financed by FLA members through the POS was 91% in the twelve months to October.

The POS consumer used car finance market reported new business up in October 14% by value and 8% by volume, compared with the same month last year. 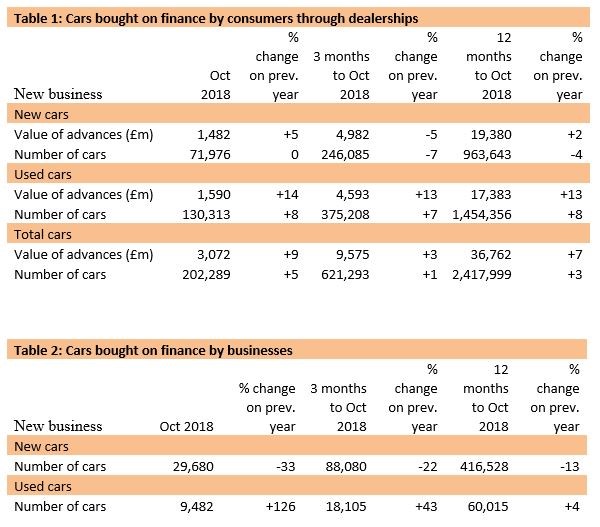 Time to be open about dealer finance expertise, a guest opinion

Time to be open about dealer finance expertise, a guest opinion