The Finance and Leasing Association (FLA) has said that the consumer used car finance sector’s 9% growth by value and 2% by volume drove a market “bounce back” in June.

Although overall business volumes in the first half of the year were 32% lower than the same period in 2019 as a result of the COVID-19 coronavirus lockdown, June’s used car finance result provided some cause for optimism.

The FLA said that the overall value of advances rose to £1.6 billion as a total of 121,935 vehicles were financed by its members during the month.

By comparison, with car showrooms in Wales and Scotland still closed for the majority of June, the consumer new car finance market reported a fall in new business of 16% by value and 21% by volume in June 2020 compared with the same month in 2019. 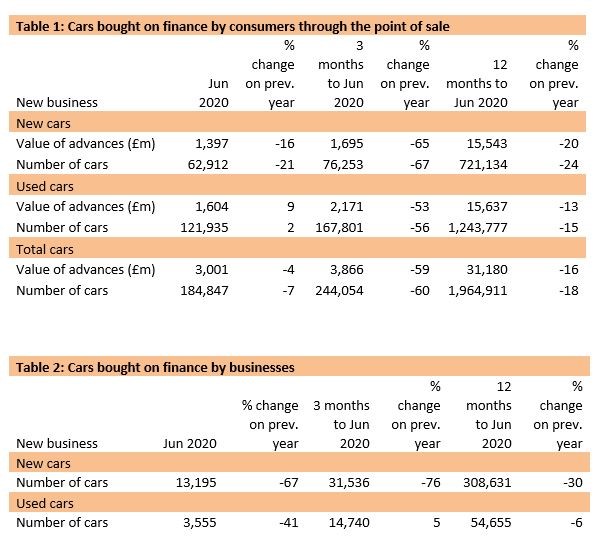 Geraldine Kilkelly, head of research and chief economist at the FLA, said: “The consumer used car finance market led the recovery in June as showrooms began to re-open.

“Monthly new business volumes in this market were back to normal levels following the record low reported in April.

“The consumer new car finance market has taken a little longer to bounce back, but new car registrations figures suggest the market returned to growth in July.”

The percentage of private new car sales financed by FLA members held steady in the twelve months to June 2020 at 94.3%.

Kilkelly was keen to highlight the pressure that has been placed on motor finance providers during a period which has seen them required to provide support to consumers impacted by COVID-19 in the form of payment holidays.

Echoing the sentiment of Stephen Haddrill, director general at the FLA, she appealed for support for the sector, stating added: “While the latest FLA figures are encouraging, the economic outlook remains highly uncertain.

“The motor finance market is faced with a prolonged period of significant demand for forbearance.

“To meet this and the pent-up demand for new credit, we continue to urge the Government and Bank of England to ensure that all lenders, including non-banks, have access to financial support schemes.”