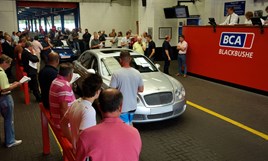 Average used car values rose by 1.9% or £154 month-on-month in July, according to the latest figures from BCA.

Average values for dealer part-exchange cars fell slightly by £10, but at £4,268 were the fourth highest ever recorded by BCA.  Average nearly-new values improved by nearly £900.

Average values for dealer part-exchange cars fell slightly by just £10, but at £4,268 were the fourth highest ever recorded by BCA.    Year-on-year values remain ahead by £203 (4.9%), with CAP Clean performance ahead by nearly two points compared to a year ago.

“Sales have been well attended throughout the auction network in July and online bidding has been strong, but it is noticeable that buyers are being more selective.

“Condition, preparation and presentation is important and it is worth considering SMART repairs for those cars that have suffered low level cosmetic damage in the shape of car park dents, stone chips and damage to alloy wheels.”

He said: “There is little to be gained by over valuing cars, particularly when there is increasing competition for the buyer’s wallet.”

The past six months have recorded the six highest average monthly values on record for the fleet and lease sector. Retained value against original MRP (manufacturers retail price) fell marginally to 41.69% over the month, with age and mileage broadly static.