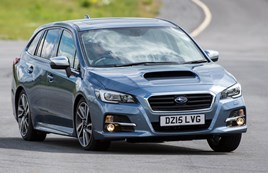 Subaru’s new Levorg Sport Tourer will go on sale in September with a single model priced at £27,495.

The new model gives Subaru dealers a replacement for the Legacy for the first time since that model ceased production in 2008. Its price of nearly £30,000 increases the entry pricing for the model compared to the previous Legacy which was priced from £21,995.

The car will be available in a single trim level called GT, with all-wheel drive (AWD) and a high level of specification as standard.

Leather trim is also featured on the door trims, on the centre console and on top of the multi-function display on the dashboard.

When it goes on sale in the UK, the Levorg will not be available with a diesel

The Levorg will not be available in the UK with a diesel engine from launch. The new model will come with a newly-developed four-cylinder 1.6-litre DIT (direct injection turbo) Boxer petrol engine paired with a Lineartronic (CVT) transmission.

The new petrol engine has a CO2 emissions output of 164g/km and fuel efficiency of “nearly” 40mpg.

Other standard equipment includes rear vehicle detection’ system, which alerts drivers to vehicles which are crossing behind, blind spot detection; lane change assist and rear cross traffic alert, which detects vehicles passing behind when reversing out of a parking space.