NFDA and dealers to discuss Brexit with politicians 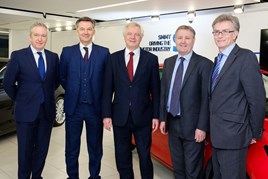 The NFDA said it will meet politicians in the House of Commons in February to discuss Brexit as retailers called for representation at UK plcs “top table”.

It follows a meeting between  manufacturer representatives including BMW, Ford, Honda, Jaguar Land Rover, McLaren, Nissan, Toyota and Vauxhall and the Secretary of State for Exiting the European Union, David Davis, along with DFT and BEIS ministers, at an SMMT roundtable event in December.

Davis has said that the Government’s Brexit plan will not be published until February.

The National Franchised Dealers Association has yet to reveal which ministers will attend its meeting, but said it would allow director Sue Robinson and a delegation of retailers to highlight the importance of the retail sector and lobby on the need to consider Brexit’s  effects on the franchised network.

Some dealership and group bosses reacted to the manufacturers’ meeting as evidence that the retail side of the industry was being “overlooked.”

However, Daksh Gupta, Marshall Motors' chief executive, – one of the retailers who will attend February’s meeting – said that was not the case.

Gupta said: “There are certain things that the NFDA and SMMT do work very closely on, but I think it is a positive thing that we, as retailers, will have our own discussions with ministers in the new year.

“Although our fates are aligned in some ways, the changes affecting the OEMs after the referendum are quite different to those facing the retail side of the industry.”

Graham Jacobs, Picador chief executive, said it was essential that retailers and the NFDA joined the SMMT at the “top table” during economic discussions.

He said: “As a member of the NFDA that’s where I want them, without question.

“Over the past two or three years, the manufacturers have gained more and more control. It does feel like retail is overlooked at times.”

The SMMT told AM that its event had been organised by the Department for Exiting the European Union and that it had not been responsible for the guest list.

The NFDA said it had a “strong and constructive working relationship” with the SMMT, with Robinson meeting Mike Hawes, SMMT chief executive, monthly.

It added: “The NFDA, representing retailers, has met with a number of MPs and ministers on a regular basis since the party conferences in October and we will continue to do so in the coming months.

“In addition, we have a meeting scheduled for the beginning of February at the House of Commons, which a number of dealers will be attending.”