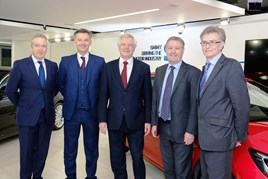 Car manufacturers have discussed the possible effects of Brexit within the automotive sector at an SMMT roundtable event attended by the Secretary of State for Exiting the European Union and DFT and BEIS ministers.

Davis said that he would take a “data driven” approach to Brexit negotiations with manufacturers, who are keen to hear assurances that the government will mitigate the effects of any trade tariffs with the EU.

Davis said that he wanted a “calm and orderly” withdrawal from the EU, according to the newspaper, but last month told banking executives he was “not really interested” in a transitional deal of the kind said to be sought by UK-based manufacturers.

Speaking to The Times after yesterday’s meeting one car executive admitted that the politicians present had been “very non-committal”.

The SMMT has previously estimated that tariffs on car exports and imports could cost the UK motor industry around £4.5bn a year.

Speaking after yesterday’s meeting SMMT chief executive Mike Hawes said: “Today’s discussions were a good opportunity to meet with government to reinforce the success and importance of UK Automotive, and to highlight the specific priorities for our sector when leaving the European Union.

“Being part of the single market has helped make the UK automotive sector amongst the most competitive in the world and a critical part of the UK economy.

“It is essential that we maintain those benefits and we will work with government and our partners in Europe to ensure the global success of our sector continues in the future.”

The SMMT stated that the British automotive sector is a “UK success story”, turning over £71.6 billion, employing more than 800,000 people and manufacturing more than 1.5 million cars and 2.4 million engines in 2015.

Over 80% of UK vehicle production is exported to more than 160 countries globally.