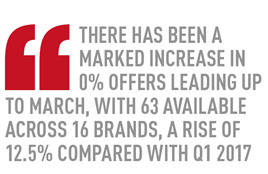 A month out of the gate and the market is still down, but AM’s financial offer data shows manufacturers going after customers in Q1 this year with some aggressive offers.

With the March plate-change this month and the prospect of older diesels facing extra tax from April, the financial incentives backing new products up should prove to be a boost this quarter.

This indicates that the manufacturer finance houses are getting behind dealers to tempt customers in what is the most important month of the year for dealers.

There are quite a few brands offering no-deposit offers too, with Smart’s Fortwo and Forfour, the Mitsubishi Mirage and the Renault Clio all available with no advance payment.

The average monthly payment in Q1 based on AM’s data is £345 a month, although when taking out niche and higher premium models, the average comes down to £283.

The seven-seat Škoda Kodiaq could be the priciest mainstream model in AM’s data, but it’s £375 a month, which isn’t astronomically beyond the average monthly price level.

The highest APR in Q1 is on the Jeep Wrangler, at 7.5%. Jeep stands out in particular for Q1 due to having a difficult start to the year, down 67.72% to just 235 units. While the Wrangler is a niche product targeted at a very specific type of buyer, Jeep’s dealers do have affordable options, with the Renegade at £199 over four years and the Grand Cherokee on a 0% offer.

MG had a positive January with new car registrations, up 131.71% to 475 units. The MG3, ZS and GS are now all available for less than £200, way below the average monthly payment, which should help attract customers.

Nissan had a big drop of 30.42% to 7,917 units in January, although 0% offers on the majority of its model range, including core models such as the Qashqai, Juke and Micra can hopefully help dealers get back on track in the run-up to March.

Other than the niche John Cooper Works three-door hatch, Mini’s line-up is supported by a 2.9% APR PCP offer with all monthly payments below £280.