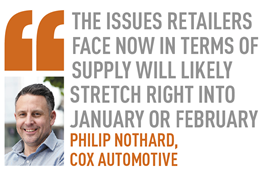 The introduction of the Worldwide Harmonised Light vehicle Test Procedure (WLTP) and the growing momentum of anti-diesel sentiment may have sounded the “death knell” for the pick-and-mix options list.

Manufacturers are starting to reveal the impact on their model ranges of a year that has felt the weight of political and economic forces upon it and AM’s research revealed that the loser may be the consumer.

As well as supply delays caused by the homologation of certain models to the new WLTP standards, manufacturers have been forced to axe certain model variants that have struggled to perform under the new regime. This is happening alongside a 28.7% reduction in YTD registrations of diesel models, which have fallen out of favour.

Philip Nothard, head of external relations at Cox Automotive, is in no doubt of the effects.

The former Cap HPI editor said the arrival of WLTP could have sounded the “death knell” for the array of options made famous by mainstream cars such as the Fiat 500 and Vauxhall Adam.

“This caused huge confusion for the sector,” said Nothard. “When a car came back into the market, it was near-impossible to determine what it might be worth.

“WLTP has pretty much brought an end to all that. Along with the pressure on diesel, manufacturers have taken the opportunity to slim their ranges and do away with a lot of trims and options.

“It’s a trend that is only likely to gather momentum. It makes life easier for the manufacturer and the car retailer.”

WLTP’s erosion of choice in the showroom results from the regime’s application of tests that establish the effect of optional extras on CO2 emissions – through additional weight and drag – and an accompanying tax penalty.

Samuel Keates, the director of specifications at Autovista Group, explained: “Under the new WLTP regime, worst- and best-case cars need to be tested with their optional equipment fitted to present a clear view on more achievable driving emissions and fuel consumption for each level of specification offered.”

Autovista found that on a specific variant of a premium-brand -segment model popular with fleet buyers, its CO2 emissions rating rose from 124-136g/km under NEDC to 152-166g/km under the WLTP test. The inclusion of a tow bar could have added a further 1-2g/km to its taxable results. A panoramic roof generates a similar effect.

An increase in wheel size from 17 inches to 18 inches, meanwhile, adds about 2g/km more in CO2 emissions.

Some manufacturers have already started to streamline their model ranges to take account of the trim-by-trim test regime.

The brand said it is responding to changing consumer habits and to the needs of millennials, but the scheme will also simplify tax treatments under the WLTP and RDE test regimes.

Renault has taken similar steps, introducing its EasyLife philosophy. The move has introduced a three-trim line-up (Play, Iconic, and GT-Line) to Clio, Megane and Captur.

Ralph Speth, Jaguar Land Rover’s chief executive, announced in September that it would place about 2,000 workers at its Castle Bromwich manufacturing plant on a three-day working week as a result of production cuts.

The only loss from JLR’s line-up has been the high-powered, 380PS petrol engine, but WLTP has had a severe impact on the eco-credentials of some models.

BMW has discontinued its plug-in hybrid 330e and the 520d Efficient Dynamics, both popular models with drivers.

The company said it stopped selling the 330e primarily because it wasn’t updating the existing 330e engine to meet the new emission standards, with a new 3 Series due in 2019. It said it no longer saw the need for the 520 ED in the line-up.

A spokesman told AM that the BMW X1 xDrive20i (replaced by an X1 sDrive 20i) would return to the range in March next year after a temporary end of production, while petrol variants of the BMW X5, BMW X6, X5M and X6M all stopped in May.

However, the rest of the X5 range stopped production in June, ahead of the arrival of a new generation vehicle in November.

Production of petrol variants of the BMW 7 Series Saloon also stopped, recommencing with a “mid-life update” in early 2019.

Mercedes-Benz has stopped production of its plug-in hybrid C-Class and E-Class models, but said WLTP had coincided with some life cycle changes and product launches and that the stoppages had not been prompted by WLTP.

Toyota has just one diesel-engined vehicle in its current line-up – the Land Cruiser 4x4 – but WLTP has impacted nonetheless. The published CO2 emissions on the Prius rose from 70g/km to 78g/km, pushing it out of the 75g/km bracket for congestion charge exemption.

PSA Group’s Peugeot and Citroen brands have been undergoing a programme of “range rationalisation” since the start of the year.

At Citroen, the trim derivative count across all ranges has fallen from 114 on January 1, 2018, to 92 as of August 31, with a reduction from 23 available diesel engine options across all models to 17.

Peugeot’s trim options declined from 142 to 118 over the same period, despite the inclusion of 14 new 508 saloon options. The diesel engine count across the range has fallen from 23 to 16, including the 508’s three options.

Kia dropped its diesel Rio and Venga models in 2018, but maintained its model derivative count at 148.

Suzuki has discontinued 1.6-litre diesel-engined versions of its Vitara and S-Cross, meanwhile, as demand slipped to just 3% of sales, the brand said, with the AGS automatic gearbox-equipped Celerio supermini the brand’s only WLTP casualty.

Mitsubishi has culled the 1.6-litre and 2.2-litre diesel engines from its range, which made up 44% of ASX sales, and also replaced its Outlander diesel with a new petrol-engined variant.

WLTP has resulted in some consumers facing lead times that stretch well into the New Year.

Nothard said: “The issues retailers face now in terms of supply will likely stretch right into January or February. It’s going to be a very challenging fourth quarter for franchisees of certain manufacturers.”

A spokesman for BMW conceded that the switch-over to WLTP had led to “a brief gap on the diesel offering on some models”.

Volkswagen had nine vehicles unavailable to franchised retailers ahead of the September 1 switch-over, according to one AM source.

According to a statement issued by VW, the Golf and Passat GTE models were removed from order books due to extended delivery lead times, but would return to the brand’s line-up at a later date.

It added: “The rationalisation of the model ranges and orientation to future market requirements are continuous processes within the Volkswagen Group brands, irrespective of WLTP.

“With the changeover to WLTP, complexity will be reduced at an even faster rate than was previously the case this year.

“As soon as affected model variants are sold out, no further orders will be accepted.”