The political and economic turmoil triggered by 2016’s EU referendum vote appears to have transformed AM’s Leave-supporting majority of Brexit survey respondents into a win for Remain.

Three years after car retailers proved to be an accurate barometer of the public mood, with 52% indicating they would vote Leave, 54% of respondents to the 2019 follow-up survey claimed that they voted to remain when they entered the ballot box on June 23, 2016.

More significantly, a 59.6% majority of voters in our latest survey said they would choose to stay in the EU if they were given the chance again.

Of the 40.6% of respondents who said they voted ‘Leave’, 14.3% admitted that they would change their vote given a second chance.

Sue Robinson, the director of the National Franchised Dealers Association (NFDA), insisted that, despite AM’s referendum-mirroring survey result in 2016, “a majority of NFDA members, polled before the referendum, voted to remain”.

She added: “NFDA is not surprised by the swing in sentiment, if there is, in fact, a swing. The potential impact of Brexit on the UK automotive industry and other important sectors was downplayed by politicians.

“Now that the consequences are a little clearer, it is not surprising that some leavers are reflecting on the challenge that lies ahead.”

Almost three quarters (72.6%) of respondents to AM’s 2019 Brexit poll said the automotive retail sector had suffered as a result of the Brexit vote. About a quarter (24.4%) claimed it had not.

David Bailey, Professor of Industrial Strategy at Aston Birmingham Business School, said it was hard to accurately differentiate the effects of Brexit on the retail sector from those created by negativity and taxation changes surrounding diesel vehicles and the impact of the Worldwide Light harmonised vehicle Test Procedure (WLTP).

Bailey, who will speak at AM’s Automotive Retail Congress on May 21, said he was not surprised that many car retailers would have voted in favour of leaving the EU, however. He said: “Often (car retailers) are confident people, who feel that they can navigate through choppy waters.

Imperial Cars’ operations director, Neil Smith, said he did not vote in the referendum, as he felt unable to decide given the lack of information.

However, he added: “The Brexit situation only has to hit the confidence of 10% of consumers and that’s 10% of potential car sales put at risk. That would hit the sector extremely hard.”

Paul Goodwin, managing director of Arbury Group, described the three years since the vote as a “disastrous period in terms of the flow of information reaching businesses and the general public about Brexit”.

“For me, the biggest concern is that there has never been a bigger disconnect between Government and the people,” he said. 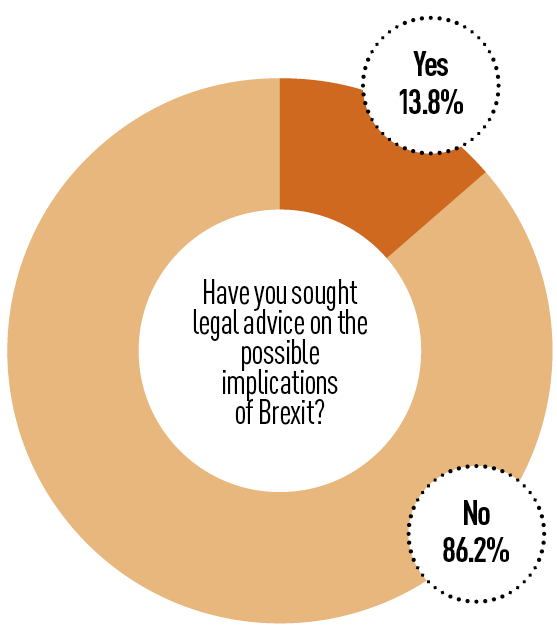 Goodwin was the only retailer AM spoke to who had. He said: “Our solicitors helped us to alter some of the wording on our contracts with customers and suppliers to account for potential pricing changes in the event of additional post-Brexit taxes and tariffs.”

Bailey said he was surprised that retailers had not sought legal counsel in greater number “given the amount of time and effort that legal companies have put into researching the impact of various outcomes”.

However, Nona Bowkis, legal advisor at Lawgistics, said legal professionals had little advice to offer at the moment.

She said: “A lot of the bigger legal firms have issued advice, but that’s been more to do with supply chains. Very little has filtered down into the key issues which will affect car retail.

“For now, it’s a futile exercise. We’ll be ready to go as soon as we know what is actually going to happen.”

Goodwin said Arbury’s manufacturer partners had been supportive and kept him updated on their Brexit plans.

However, just 42.4% of our survey respondents said they had received assurances from their manufacturer partners about vehicle supply post-Brexit.

The Brexit vote has had “no impact” on recruitment, according to 61% of respondents, with just 4.6% stating that their business’s staffing had been severely affected.

Many of the worst-affected areas may be those outsourced to third parties.

Martin Peters, sales director at valeting service provider Autoclenz, said: “The truth is that UK residents just don’t want to fill the kind of labour-intensive jobs that we offer.

“Talk that the UK might only accept skilled workers earning over £30,000 is completely arse about face. Currently, 78% of our operatives are Eastern European. If the flow of labour stops, then we will have serious issues.”

He added: “The idea that these people have come here to take our jobs is simply a myth.”

Bowkis said changes to EU employment law will be at the top of Lawgistics’ agenda once the Government’s exit plan is finalised.

While the impact of legalities on the employment of foreign nationals in the automotive sector may not be fully felt until after Brexit, there are suggestions that a shifting dynamic between the UK and EU may already be having an impact.

AutoTech Recruit managing director, Gavin White, said the migration of skilled technicians from the EU had not escalated since the Brexit vote, but had been ongoing for a decade.

He said: “I think it is an EU-related issue. As funding has been channelled into countries like Poland, so workers have been going back to work in their home nations.”