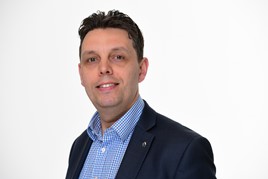 Stephen Whitcombe has been appointed as Groupe Renault UK’s head of brand at its Pro+ Commercial Vehicles division.

Whitcombe was previously a regional director and prior to that role had worked as head of total customer experience and network engagement.

He has worked with Groupe Renault since 1998, after joining as a graduate trainee having gained a degree in management studies from the University of Bradford.

Whitcombe said: “Not only have we just launched new Master and new Trafic, Renault continues to lead the way with its range of all-electric ZE products, from the Twizy Cargo through to the new Master ZE.“

“With such a diverse line-up the Pro+ Commercial Vehicle operation continues to deliver products that continue to have strong appeal to businesses and trades, and we are looking forward to building on the division’s considerable success over the past year as we accelerate into 2020”.

The brand’s senior management team, led by network operations director Louise O’Sullivan, ventured to the South West of the UK to hand special awards to the long standing partner businesses this week.

Bristol-based dealerships City Motors and SJ Cook & Sons have represented Renault for 50 and 40 years, respectively, and AKS Yeovil has represented the manufacturer for 25 years.

All three dealerships are family owned and attribute their longevity and continued success to their unwavering focus on customer service and the broad Renault and Dacia model ranges.