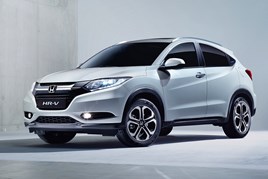 Honda is hoping to return to growth in Europe with a renewed model line-up and a £198.3 million investment in its UK plant in Swindon.

Honda is targeting 200,000 units a year in Europe and is hoping its new HR-V crossover, new Jazz, new CR-V and the next-generation Civic launched in early 2017 will all help it get there. The new Civic will be built in Swindon.

Honda has seen its market share decline from a high of 106,018 units a year to a low of 50,577 units in 2011. The brand has been slowly recovering its UK registration volumes over the last three years.

The new HR-V is expected to add 15,000 units a year to Honda’s UK volumes alone. The Japanese brand stopped importing the low volume CR-Z, Insight and Accord models.

Honda also starts production of its NSX hybrid supercar to act as a halo model for the brand.

Ross said: “2015 has been an important year for Honda, but it’s very much the start of things to come.”