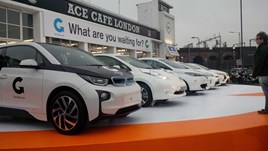 Analysis by Go Ultra Low shows that 20,992 motorists bought a plug-in car between January and September this year, growth of 138.5% against 2014.

Gol Ultra Low said demand has been fuelled by a greater choice of models, with more than 27 pure electric or plug-in hybrid cars now available in the UK, ranging from high-performance sports cars to capable family run-arounds.

Poppy Welch, head of Go Ultra Low, said: “The growth in plug-in car registrations is in line with our expectations.

“This trend should continue over the course of this year as we know that motorists are keen to achieve maximum miles for the lowest cost, while minimising emissions and environmental impact.”

In line with a trend seen throughout this year, registrations of ultra low emission vehicles have increased their market share to over 1% for the year so far. This is up from 0.44% in 2014.

The newest statistics reveal that Mitsubishi leads the new registrations charge, with 9,303 of its flagship Outlander PHEV sold since the start of 2015.

Nissan follows with its all-electric Leaf racking-up 4,285 registrations, and BMW’s i3 is the nation’s third most popular ultra low emission vehicle, also nearly doubling its tally with 1,564 registrations.

Tesla does not openly reveal its sales figures, but the Model S is also expected to be within the top 10.

The Government anticipates that 5% of new car registrations (around 100,000 units) will be ultra low emission by 2020.