Dales wins Seat Dealer of the Year for ‘outstanding performance’ 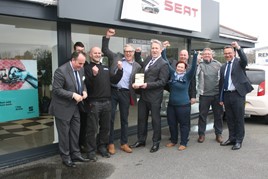 Dales Central Motors' Seat Scorrier dealership has been awarded the Spanish car manufacturer's UK Dealer of the Year award for outstanding performance in 2017.

The Cornwall-based retailer stood out from competitors due to cross-channel sale figures, staff development values and customer satisfaction ratings.

Dales Scorrier’s sales manager, Adam Gill, said: “As a franchise we believe that if you value your staff and customers then success will always follow, and this award is proof that it works.

“Combined with an award-winning product line-up and a brand commitment to affordability, the entire Seat network is enjoying a period of success, and we’re proud that our team has been recognised as part of this.”

With ten categories - ranging from new and used car sales, lead generation figures and fleet sales to staff development and customer service ratings – the awards promote employer excellence as much as retail quality and service.

A total of 11 awards were presented to winners on-site, they include:

Seat UK’s managing director, Richard Harrison, said: “With the great success Seat has seen over the past 12 months, this year’s awards was the most hotly-contested yet, and each winner has had to be nothing short of outstanding.

“Dales Scorrier has stood out for its all-round performance, excelling in every category to truly embody the Seat core values.”

As well as being presented with a trophy and certificate, category and overall winners also earned cash rewards for every staff member, with the Top Performer Gold Award winners receiving £250 each.