The Society of Motor Manufacturers and Traders has conceded that UK-based car makers are not ready for a ‘no deal’ Brexit after revealing that manufacturing levels had declined by 3.3% in the first half of 2018.

The SMMT reported that the output of UK car plants had declined by 5.5% in June (to 128,799) as “a perfect storm of events” hit production for the UK – the number of vehicles destined for the home market down 47.2% during the period.

During the first six months of the year, UK car manufacturing has declined by 3.3% overall, to 834,402 units.

Meanwhile, the SMMT sought to highlight the high proportion of car that are imported to the UK.

During the same period, more than 87% of the cars registered by British buyers came from overseas plants, and more than two thirds (69.1%) from the EU, highlighting the importance of tariff- and barrier-free trade.

“First half figures are a reminder of the exports-led nature of UK Automotive, the integrated EU supply chain and our mutual dependency on free and frictionless trade.

“The UK government’s latest Brexit proposals are a step in the right direction to safeguard future growth, jobs and consumer choice – not just in Britain but right across Europe.

“We now look to negotiators on both sides to recognise the needs of the whole European automotive industry which, combined, employs more than 12 million people.

“Any disruption risks undermining one of our most valuable shared economic assets.” 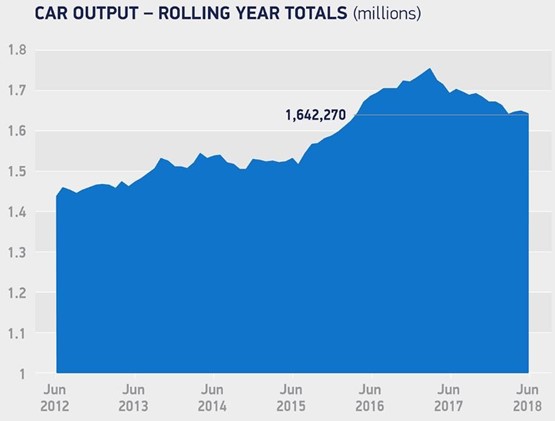 The SMMT said that, in the six months to the end of June, global demand for British-built cars grew in a number of key markets, notably the US – the UK’s second largest exports destination after the EU – where exports rose by 1.5% thanks to a raft of new, desirable models.

Demand also grew substantially in Japan (+77.3%) and South Korea (+67.8%), while China maintained its position as the UK’s third biggest customer, taking 6.4% of exports.

However, Hawes once again warned of the danger of a ‘no deal’ Brexit and told the Financial Times that Britain’s car plants risk having to halt production if the UK crashes out of the EU.

“If there’s no deal, then there’s no implementation period, and that kicks in in just under eight months,” Hawes was quoted in the FT as stating.

While manufacturers and their suppliers are racing to prepare contingency measures, such as increasing warehousing or stockpiling parts, “no one would profess to being ‘Brexit ready’”, he said.

He added that car plants would do “everything they can” to prevent lines stopping.

“But if you can’t get the parts in, then you can’t make the finished vehicle, it will come to a halt.”

He added: “No deal is just not an option.”