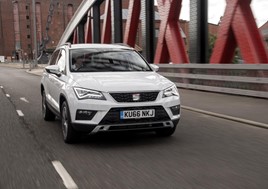 New car registrations in May 2018 rose by 3.4% in what the Society of Motor Manufacturers and Traders (SMMT) described as a “modest” increase in light of last year’s 8.5% decline during the same month.

Year-to-date the market remained 6.8% down on 2017’s 186,265 registrations, which resulted from an 8.5% slump following changes to the VED road tax legislation, with 192,649 new vehicles registered during May 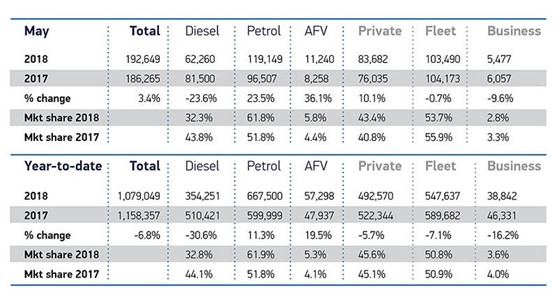 The SMMT noted that retail demand in the month grew by 10.1% in May, with more than 83,000 consumers driving home in a new car, but the business and fleet sectors suffered 9.6% and 0.7% declines, respectively.

Despite the challenges, SMMT chief executive, Mike Hawes, claimed, “May’s growth, albeit on the back of large declines last year, is encouraging and suggests the market is now starting to return to a more natural running rate.”

He added: “To ensure long-term stability, we need to avoid any further disruption to the market, and this will require sustainable policies that give consumers and businesses the confidence to invest in the new cars that best suit their needs.

“Fleet renewal is the fastest way to improve air quality and reduce CO2, and this applies to hybrid and plug-in technologies as well as the latest low emission petrol and diesels which, for many drivers, remain the right choice economically and environmentally.”

Hawes may not see his hopes come to fruition, with the introduction of the EU’s WLTP emissions testing regime likely to impact fleet sales when it is officially rolled-out in September.

Demand for specialist sports cars also rose by 12.7% as the hottest May on record saw a surge in demand for convertibles as drop tops rose 11.7% year-on-year.

Year-to-date there are clear signs that certain brands are weathering the uncertainty of the market better than others.

While Nissan’s registrations have fallen by 29.27% and premium sister brand Infiniti by 74.04% during the first five months of the year and Fiat has sustained a thumping 30.89% decline to its sales.

UK-based brands have not fared well. Jaguar has suffered a 12.4% decline in registrations YTD, with Land Rover’s numbers falling by 10.3%.

The biggest winners during the period have been Seat, with its rise of 19.48%, Volkswagen (5.59%) and Honda (3.59%), which all experienced growth in the challenging market.

Sue Robinson, director of the National Franchised Dealers Association (NFDA), said that she was encouraged by the second consecutive month of growth for the new car market but noted the potential effects of the forthcoming switch to the EU's WLTP emissions testing regime. She said: “Going forward, although the market is expected to remain at high levels, we need to be aware of the forthcoming WLTP test coming into effect in September and we are currently working to improve industry understanding of the regulation.”

Richard Jones, managing director of Black Horse, said: “These figures continue to reflect a natural market correction where new car sales are moving to more balanced volumes in 2018 compared with last year. However, confusion over fuel choice continues to cause a fall in sales of new diesels. We’re seeing signs that the public policy debate on emissions and diesel is shifting to recognise the key issue of getting drivers into newer, cleaner cars irrespective of fuel type but we still have a long road ahead.

"For example how many people know you could drive a 4.5 litre Euro 6 diesel car into London’s low emissions zone without being charged? Clarity for consumers around the diesel dilemma and fuel options overall will drive more informed purchasing decisions and help remove older more polluting vehicles from the UK’s roads.

"The biggest difference we can make in the next five years is to accelerate the removal of these older cars and replace with newer Euro 6 technology.”