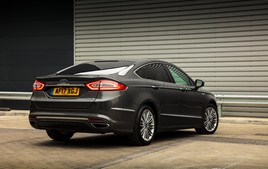 Ford has refused to comment on suggestions that it is poised to cut 24,000 jobs in Europe amid plans production of its Mondeo saloon and S-Max MPV.

The US car giant dismissed newspaper reports based on analysis by Morgan Stanley, which suggested the brand could slim down its European product line-up and axe production jobs as a result, as “pure speculation” in a statement issued to Autocar magazine.

Ford said “Mondeo remains a core part of our product line-up in Europe” and stated that the vehicle was about to receive a number of upgrades and did not deny European job losses but said that “the number of job losses quoted by a number of media is pure speculation”.

Morgan Stanley has estimated that Ford will shed 12% of its global workforce as part of a major cost-saving exercise.

In its native US the brand is already in the process of dropping saloons from its line-up in a bid to drive growth in the burgeoning SUV sector.

Autocar reported that a £9 billion restructuring of the brand’s European operations is planned following losses of nearly £57 million in Q2 of 2017.

In its statement to Autocar, Ford said: “As we said in our second quarter earnings in July, our Europe business requires a major redesign to deliver our longer-term target of 6% EBIT margin.”

The Mondeo is currently built in Valencia, Spain, while the Spanish plant also handles construction of the Galaxy and S-Max.