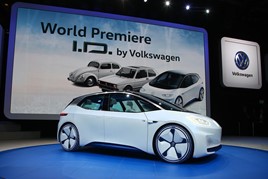 The Volkswagen Group’s supervisory board is expected to vote on changes to its manufacturing operations as part of an effort to accelerate its shift into electric vehicles (EV).

The Financial Times has reported that the board will meet on Friday to vote on a number of proposals which could see the group’s German plants adapted to specialise in a new wave of EV product, with some production of conventional vehicles shifting to its plants in the Czech Republic.

Sources of the newspaper said that VW was seeking to revamp two German plants, in Emden and Hannover, so that they can produce electric cars in the early 2020s.

The Emden site could deliver a sub-€20,000 EV into the forthcoming Volkswagen ID range that would be comparable to a Polo hatchback, the FT reported.

However, the board’s plans will need to be rubber-stamped by VW’s powerful labour unions — which make up half the board.

The unions are concerned that the plans would put German jobs at risk as the production of greater volumes of EVs at plants in the group’s home market would demand fewer workers as an electric car needs only two-thirds the parts of a conventional car.

The FT’s sources said that VW wants to cut headcount in a responsible way so that tens of thousands of ageing workers can retire rather than be made redundant.

The Volkswagen Group’s bold plan to launch over 80 new electrified models by 2025, including some 50 pure EVs, were unveiled at last September’s Frankfurt Motor Show.

Currently, the only pure EV products in the Group’s line-up are the e-Golf and e-up hatchbacks.

Plans to restructure the group’s vehicle production operations would aim to deliver earlier growth of its EV product, with new vehicles becoming available in greater numbers in the early 2020s.

VW e-Golf: EVs are not helped by charging that’s free of charge

VW e-Golf: EVs are not helped by charging that’s free of charge