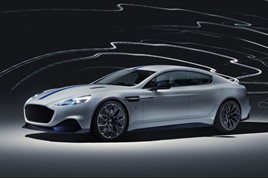 Aston Martin launched its new Rapide E luxury electric vehicle (EV) at the Shanghai Motor Show as Lotus Cars announced that its first all-new production car for a decade would be an EV hypercar – the Type 130.

Developed in collaboration with Williams Advanced Engineering (WAE), the Rapid E will be buoilt at Aston Martin’s new manufacturing plant at St Athan, Wales, with a limited-run of 150 vehicles set to roll off the production line.

Lotus’ new creation, meanwhile, was shown only in the form of an abstract designer’s impression, but the Norfolk-based sports car brand stated that the new model would be officially unveiled, in London, later this year.

Aston Martin’s first fully-electric model – Rapide E – is now ready for production, meanwhile, and the brand claims that its 800V battery system and twin rear-mounted motors are good for 610PS and 950Nm of torque.

It claims the Rapid E – a pre-cursor to the arrival of the Lagonda brand as an EV-only luxury arm of the Aston Martin stable – will deliver a range of over 200 miles under the Worldwide Harmonised Light Vehicle Test Procedure (WLTP), alongside sub-four second acceleration to 62mph. 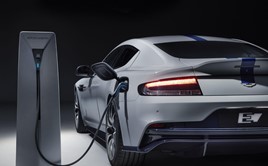 Speaking ahead of Rapide E’s Shanghai debut, Dr Andy Palmer, president and Group chief executive, Aston Martin Lagonda, said: “As our first all-electric production car (the Rapid E) is a truly historic step, one that signals Aston Martin is prepared for the huge challenge of an environmentally responsible and sustainable future.

“As a car company we cannot afford to passively allow that future to come to us; we have to actively chase it.

“Only by doing this can we learn and prepare, but also preserve those things we love as drivers and car enthusiasts.

“That’s why it was so important to me that in embracing EV technology we should not let go of those unique qualities that define an Aston Martin.

“I believe Rapide E embodies that desire and paves the way for a hugely exciting future.”

Details of the drivetrain of Lotus Cars’ venture into the world of EVs have yet to be revealed. 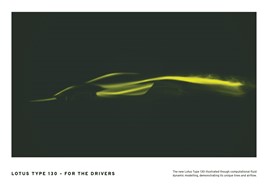 While it claims that development of the all-new Type 130 hypercar is now in the “advanced stages”, details are very sparse.

The sports car manufacturer’s chief executive, Phil Popham, said: “Type 130 will be the most dynamically accomplished Lotus in our history.

“It marks a turning point for our brand and is a showcase of what we are capable of and what is to come from Lotus.”

Lotus said that its all-new car will be revealed, together with the full remarkable details and specification of this technical tour de force, in London, the birthplace of Lotus, later this year.