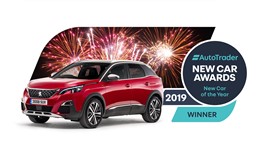 The Peugeot 3008 has been announced as the best new car of 2019, according to a consumer vote for the third-annual Auto Trader New Car Awards.

The Auto Trader New Car Awards are decided by over 63,000 car owners and category winners represent the consumer champions of the new car market, based on the honest opinions of those who have bought, driven and lived with their new vehicles.

Drivers review vehicles in 16 different criteria, ranging from reliability and performance to running costs, to give potential buyers a complete picture of ownership.

Consumers are also asked about their overall satisfaction with their car and how likely they would be to recommend the model to others.

Peugeot's 3008 SUV beat a number of key rivals for the title of Car of the Year 2019, including the Hyundai Ionic, Skoda Octavia and Mercedes-Benz E-Class.

Auto Trader said that owners of the 3008 had rated it highly in a range of areas, including its design, interior practicality and its innovative tech, including its i-Cockpit infotainment system.

Erin Baker, Auto Trader’s new car editorial director, said: “The Peugeot 3008 SUV was a stand-out winner and has been highly commended for how comfortable and safe it feels when driving, as well as the quality of its interior and its good looks.

“Owners were quick to highlight the quality of the technology that comes as standard and its features and accessories. It’s a fantastic all-rounder and a wholly worthy winner of New Car of the Year.”

Peugeot UK managing director, David Peel, said: “Any award based on owner feedback is extremely important for us and it’s fantastic to see so many owners praise their 3008.”

The complete list of winners in the Auto Trader New Car Awards 2019 are:

“Not only have they regularly topped the list as the fastest selling used car since early last year, but they now account for one in five of all body related searches on Auto Trader.

“In case we needed any further convincing, there can be little doubt that in today’s turbulent market they represent a great opportunity for retailers and a vital addition to any forecourt.”