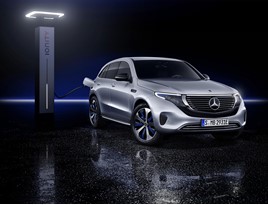 Daimler has announced bold electrification plans which will see its entire passenger car portfolio of Mercedes-Benz, Maybach and Smart vehicles become carbon-neutral by 2039.

Källenius, who takes over from Dr Dieter Zetsche as CEO of Daimler AG later this month, revealed that Daimler intended that all its European factories will be carbon-neutral by 2022, with a carbon-neutral line-up of new passenger cars offered by 2039.

Mercedes plans to transform its production lines into carbon-neutral facilities and pressure suppliers into doing the same alongside its plans for a range of new fully-electric and fuel cell vehicles.

Källenius said: “We aim to have a carbon-neutral new passenger car fleet in 20 years. Let’s be clear what this means for us: a fundamental transformation of our company within less than three product cycles.”

Mercedes predicts that more than 50% of its car sales will be full EV or plug-in hybrid by 2030.

Its new zero-emission EQC SUV is priced from £65,640 and is available to order in Sport, AMG Line, AMG Line Premium and AMG Line Premium Plus trim levels, with deliveries to UK dealerships expected to commence in July.

Daimler is not the first car manufacturer to target carbon neutrality across its production facilities and product range.

The Volkswagen Group has already outlined similar plans for fleet and production wide carbon neutrality across all brands, albeit by 2050.

In a statement issued yesterday (May 13) Helen Clarkson, the chief executive of The Climate Group, the international non-profit with a mission of accelerating climate action, said that Daimler’s announcement marked “a new start for the automotive industry to take on its full responsibility in tackling climate change”.

She added: “Businesses are the auto industry’s biggest customers, and many are already switching their fleets to electric and installing charging points through our EV100 initiative on clean transport.

“They are sending an undeniable signal that the future of transport is electric - and it’s time vehicle supply started to match their demand.

“It’s clear that the end of the road for the internal combustion engine is in sight.

“We now need more company fleets and car manufacturers to keep following the signs and go all in on electric mobility.”