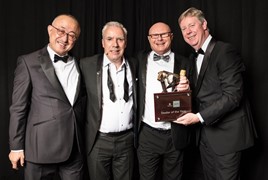 Luscombe Motors has claimed Suzuki GB’s National Dealer of the Year award as the Japanese brand issued awards to its top UK retailers.

The Leeds-based AM Awards winner and AM Best UK Dealerships to Work For winner, founded by Robin Luscombe, claimed the brand’s top accolade after finance penetration, during a ceremony held on the Spanish island of Tenerife.

Suzuki’s annual dealer awards recognise the achievements of retailers from the past 12 months and take sales and service CSI, parts sales, and the quantity of accessories sold and returned into account to establish a ranking of the best Suzuki franchises.

An individual award for outstanding performance in customer service, meanwhile, was presented to Norfolk’s Fleming Brothers for the second year in succession

A further 19 Suzuki retailers were also commended during the event for their long-running commitment to the Suzuki network, with Colin Appleyard in Keighley (West Yorkshire), and Gordon Motors Suzuki in Crieff (Perthshire), celebrating four decades with the brand.

Dale Wyatt, Director of Automobile at Suzuki GB PLC, said: “It is an honour to gather together representatives from our showrooms up and down the country, and to recognise their achievements from the last twelve months.

“We would like to congratulate all of our award winners and the businesses who received honorary mentions during the ceremony.

“They have each shown exemplary standards of work and service, and without them, we would not be in the strong position that we find ourselves in today as we head into the new decade. Congratulations, and we look forward to enjoying further success together in 2020.”

The full list of long service award recipients were as follows: