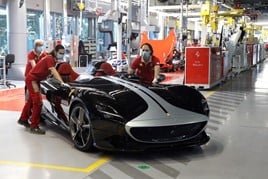 Ferrari has begun its COVID-19 recovery process with the re-start of supercar production in Italy as BMW revealed that it is targeting “maximum flexibility” to meet new car demand in various markets.

“Production will build-up gradually to resume fully on Friday, May 8, in alignment with Government regulations,” Ferrari North Europe said in a statement.

It said that no effort had been spared to prepare for the return to work, with a “Back on Track” programme established to reflect the deep commitment to its people first and foremost.

Before starting production, Ferrari has also decided to carry out training sessions for workers to explain the new precautionary and safety measures put in place.

The BMW Group in a statement detailing its Q1 performance this morning that it was “well prepared to react swiftly and decisively at all times” to new developments during the corona pandemic by systematically identifying potential scenarios.

It said that it expects expects the consequences of the corona pandemic to constrain the operations of the entire automotive industry for quite some time to come, adding that “delivery volumes in key markets are not going to return to normal in the space of just a few weeks”.

“Quite clearly, the situation remains serious and market forecasts are subject to constraints under these circumstances. We are gradually ramping up our production again according to demand in each market.

“However, we are monitoring developments extremely closely to be able to respond with maximum flexibility," said Oliver Zipse, chairman of the board of management of BMW AG.

"We are keeping a tight rein on inventory levels because liquidity has absolute priority in this situation."

In the UK, Jaguar Land Rover (JLR) has already announced that it will gradually resume vehicle production at its UK manufacturing plant in Solihull from May 18.

Bentley will restart production at its luxury car plant in Crewe on May 11, following the introduction of 250 new hygiene and social distancing measures.

According to a report by Bloomberg news, Honda UK will decide on a timetable for reopening its Swindon plant on May 8.

Nissan, meanwhile, has said that it will continue the suspension of vehicle production at its Sunderland Plant throughout May.