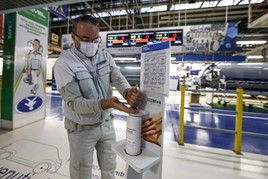 Skoda has re-opened its Czech car plants as FCA Group re-started production at its light commercial vehicle plant in Atessa, Italy – six weeks after its ceased manufacturing due to COVID-19 coronavirus.

Over 6,000 employees have returned to work at FCA's Sevel plant – a joint venture with the PSA Group – with the help of a raft of health and safety measures agreed with trade union representative.

Among the changes made to the working environment have been the installation of around 130 hand sanitizer dispensers, the posting of information on prevention on 15 large billboards and 25 video monitors, and the distribution of over 6,000 informational brochures and 18,000 posters.

The FCA Group has also installed a dozen body temperature monitoring cameras at plant entrances and over 600 points equipped with disinfectant materials for employees to clean equipment.

Production at Skoda's three Czech plants has also recommenced in consulation with the KOVO trade union.

The Volkswagen Group-owned brand said that its "all-embracing set of hygiene and safety measures" included equipping the workforce with either protective face masks or respirators.

In France, meanwhile, Toyota this week restarted an assembly plant in Valenciennes and Renault began producing engines at its factory to the west of Paris.

Commenting on FCA's re-opening in Italy, Pietro Gorlier, the chief operating officer for rthe OEM's EMEA region, said: “At the Sevel plant in Atessa today, we have demonstrated that protecting our workers is our main priority.

“Today's reopening of the Sevel plant, together with R&D activities and pre-series production of electric and hybrid models in Turin and Melfi, is the result of rigorous analysis and preparation carried out in collaboration with leading virologists and other experts and agreed with all trade unions.

“We have been working daily with the Italian government and local authorities to prepare for a return to production in Italy, while ensuring there is no compromise to the safety of anyone working at any of our production facilities or offices.”

The re-commencement of work at the Sevel plant has been accompanied by limited activities at the plants in Cassino, Pomigliano, Termoli and Mirafiori in connection with components supply.

Late last week Jaguar Land Rover (JLR) revealed that it will gradually resume vehicle production at its UK manufacturing plant in Solihull from May 18.