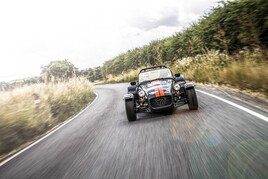 The move takes the iconic lightweight brand out of British ownership for the first time in its 48-year history, according to a report in Autocar magazine this week.

Caterham, which added its latest UK franchisee in the form of Krazy Horse in Bury St Edmunds last October also has dealerships in Cheshire, Towcester, Bristol and Gatwick but exports to 20 overseas markets – accounting for 60% of all its sales.

VT Holdings owns Wessex Garages and CCR Motor Group in the UK and has been Caterham's Japanese importer since 2009, claiming to sell more than 120 Caterham cars per year in the region.

It also operates a network of over 200 franchised car retail sites in Japan.

In a statement issued following his company’s acquisition of Caterham, Takahashi said: “VT Holdings is proud to welcome Caterham to the group.

“We have not only purchased a globally renowned performance car manufacturer but become custodians of a motoring legend.

“We will protect and develop the Seven to meet the legislative challenges that lie ahead.”

Graham MacDonald, chief executive of Caterham Cars, said: “Takahashi-san and the team truly understand the DNA of the Caterham brand, our heritage, our customers and our passions.

“As a team, we’re all excited about starting to write the next chapter for this very special brand.”