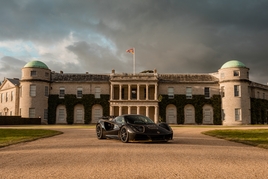 Lotus will be celebrated as the Central Feature marque at this year’s Goodwood Festival of Speed.

The Norfolk car maker will be the subject of the Festival’s annual artistic display in the grounds of Goodwood House.

It will mark the public debut of the brand’s new Emira sports car.

Each year the Central Feature celebrates the greatest achievements of a manufacturer or milestone through art.

Lotus was last selected as the Central Feature marque in 2012, with a 3D infinity loop sculpture that celebrated the singularity of purpose of a Lotus race car. This year’s sculpture is being created using an entirely new design philosophy and is set to be more interactive and accessible for those joining from home.

Owner of the Goodwood Estate The Duke of Richmond, said: "We are delighted that Lotus will star as the Central Feature at this year's Festival of Speed presented by Mastercard. Lotus cars raced with great success at Goodwood throughout the 1950s and ‘60s, including setting the ultimate lap record in 1965, and this year’s Central Feature will serve as a fitting landmark to their past, present and future achievements.

“The sculpture looks set to be one of the most dramatic and futuristic yet, bringing in elements of interactivity for modern audiences that align with Lotus’ future-facing attitude and outlook.”

The new Lotus Emira will make its public dynamic debut at the Goodwood Festival of Speed this year. It’s an all-new model, developed as part of the ongoing transformation of Lotus.

Lotus says the Emira will “set new standards” of technology, comfort, functionality and everyday useability. It goes into production later this year at an all-new manufacturing facility at Hethel, Norfolk – the home of Lotus since 1966.