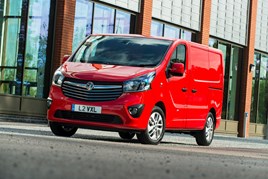 Light commercial vehicle registrations saw a 19.6% increase to 65,453 units during the plate change month of September, according to the latest data from the Society of Motor Manufacturers and Traders (SMMT).

“The van market – buoyed by robust business confidence and the ongoing trend towards online deliveries – shows no sign of slowing.”

“It was positive to see commercial vehicle registrations up in all sectors of the market – with a 24.8% growth in trucks and 19.6% in van registrations - boosted by the new 65-plate”, said Sue Robinson, director of the National Franchised Dealers Association.

Following changes to regulation and type approval in 2014, sales of heavy trucks remained poor last year. However, 2015 has seen the sector regain confidence with upward trends of 35.6% recorded this year.

Robinson said: “As the UK economy expands, we have seen a significant growth in the following sectors.

"Demand for chassis/vans between 3.5 – 6.0t has increased considerably by 67.9% in September and up 27.9% year-to-date - due to more door-to-door domestic deliveries.

“There has also been an increased demand from the construction industry, which has contributed to sales of more maximum weight multi axle rigid trucks like tippers and mixers and seen an increase of 21.1% in September and growth of 42.8% year-to-date.

“Finally, demand for three axle tractor units to haul in the distribution and logistics business’s has been strong for some time as many of these tractors operate at the EU maximum tonnage of 44t. September demand for these units increased 42.2% and year-to-date are up a massive 54.8%.

"Vans from this particular sector are purchased by corporate buyers, and a large proportion of these vehicles go into the internet delivery arena.

"These maximum weight vans rarely get registered as demonstrators or pre-registrations for targets.

“It is expected that the CV market will remain buoyant for the remainder of 2015.”

The growth in van registrations follows on the back of the highest-ever level of cars registered in September, with growth of 8.6% to 462,517 units.