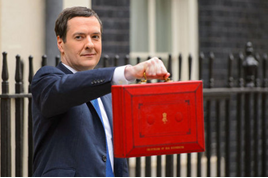 A bullish Autumn Statement deliver by George Osborne today promised growth, a declining national debt and the prospect of greater investment in roads and cheaper insurance for motorists.

The Chancellor spoke for more than an hour as he delivered his spending plans for the next five years in Parliament and pledged to deliver £12 billion in cuts despite making a u-turn on his plans to the tax credits system.

Among the key points to directly affect the motorist directly were plans to help insurance companies dealing with minor road traffic collisions with new legislation that could save the average motorist £40 to £50 per year on their policy.

In light of the recent revelations surrounding CO2 emissions the Chancellor also opted to postpone a reassessment of 3% company car benefit-in-kind (BIK) diesel surcharge until 2021 instead of being scrapped in 2016.

Alastair Kendrick, tax partner of MHA MacIntyre Hudson, said: "This is an extremely unwelcome u-turn for those who drive diesel company cars and were expecting that, of April 2016, there would be an uplift in benefit."

While day-to-day spending by the Department of Transport will fall by 37%, Osborne vowed to spend on the nation’s infrastructure with a £60 billion rise in transport funding that will aid “the biggest road building programme since the 1970s”, the electrification of key railway links, the commencement of construction on HS2 and a quarter of a billion to address the issue of Operation Stack on the M20 in Kent.

In an effort to encourage the development three million new apprenticeships by 2020, Osborne also set the apprenticeship levy at 0.5 per cent of an employer’s overall wage bill, but a £15,000 allowance for employers will mean that the levy will only hit those dealers with payroll costs over £3 million.

Carolyn Fairbairn, CBI Director-General, described the Apprenticeship Levy as the Aumtumn Statement’s “sting in the tail”.

She said: “The Apprenticeship Levy, set at 0.5%, is a significant extra payroll tax on business and by widening the net it will now catch more smaller firms. We welcome the creation of a levy board to give business a voice on how the money is spent and will work with the Government to ensure a focus on quality.”

Reforms of the current tax system are also set to be introduced with businesses expected to set up a digital account that could see processes completed within 30 days, Osborne said, as the government aimed to save cash by closing many of the UKs 170 regional tax offices.

Fairfuel UK, the lobbying group, was surprised by the lack of an announcement of fuel duty. Continuing its pressure their efforts to reduce the cost of motoring, its spokesman Quentin Willson said: “We are grateful to him for the continuing freeze that’s lasted 5 years. But let’s not forget the UK motorist remains the highest levied tax contributor in Europe. He could have been more courageous for the economy's sake and cut it by 3p.”