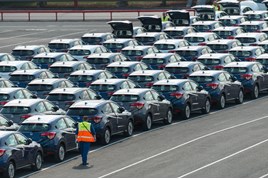 A recent study of UK dealers by CAP suggested 46.3% believe that 2016 will beat 2015 for new car registrations.

Philip Nothard, CAP consumer and retail editor, said: “We are predicting sales will exceed 2.6m vehicles, and while pre-registration has played a part in hitting this number, we are seeing a shift in the way we purchase a vehicle.

“The rise in PCP and a wide variety of leasing products, means manufacturers are able to offer some eye-catching deals.

“Used vehicle sales are set to hit 7.5m, as strong demand continues to drive the market.

“As confidence extends into next year, it will be important to manage the used vehicle supply chain to protect residual values. Manufacturers are acutely aware that the ability to offer a good deal on the front end relies on maintaining residual values.

“There’s a lot to be excited about, as we head towards four years of non-stop growth in UK car sales in 2016 – something for dealers to celebrate.”

While CAP has reported a slide in used values over the last three months, it suggested prices are likely to stabilize in January as demand increases.