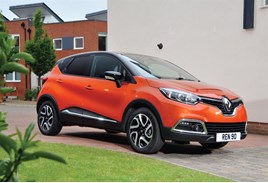 European car sales are experiencing an SUV sales boom which has seen a 25% rise in Q1 of 2016, figures published by JATO Dynamics reveal.

The big five European markets of Germany, UK, Italy, France and Spain garnered a total of 1.36 million new car registrations in March, resulting in a year-on-year improvement for the year’s first quarter of 8% to 2.89 million.

SUV registrations ranked first, accounting for more than one out of four passenger cars registered with a total of 343,400 registrations.

This came in contrast to sales of subcompacts, which fell 1% over March 2015 and grew by only 3% during the first quarter, JATO said.

Felipe Munoz, global automotive analyst at JATO Dynamics, said: “The shift from traditional segments to SUVs continues, as more carmakers invest in what has proved to be an impressively popular and high-growth segment.”

Italy saw the highest increase in registrations during March, with registrations recording an 18% jump compared to the same month last year.

This was possible thanks mostly to higher company car and private purchases, JATO said.

Despite this big increase, Italy was only the fourth largest market of the Big 5, ahead of Spain.

March registrations in Germany and Spain stalled at 0% and -1% respectively, though their YTD volumes were still positive at +4% in Germany and +8% in Spain.

Munoz said: “With lower increases across the Big five markets, we have seen an overall slowdown in growth. However, the situation continues to be positive, with an overall growth rate of 8% for Q1 in 2016.”

Volkswagen remained the best-selling brand with 137,800 new cars, though registrations dipped 2%, losing ground on its competitors by 0.77 percentage points.

Volkswagen registrations dropped by 6% in Germany and 17% in Spain, and the brand lost market share in the UK and France.

But it was not the only big brand to lose ground.

The French car maker was boosted by strong double-digit growth in Italy (+31%), France and the UK, as its SUV range continues to gain popularity (+65% in March).

The top 5 mainstream brands were followed by the three German premiums, which gained market share thanks mostly to their SUV registrations, and were collectively up by 37%. Sales of BMW’s ‘X’ family grew 43%, accounting for almost 24% of its total registrations in March.

The premium segment was boosted by strong sales increases coming from Land Rover, Volvo and Jaguar, as well as Infiniti, which more than doubled its volume over March 2015. Other key improvers included Ssangyong, Honda, Mini, Smart, Abarth and Lancia. 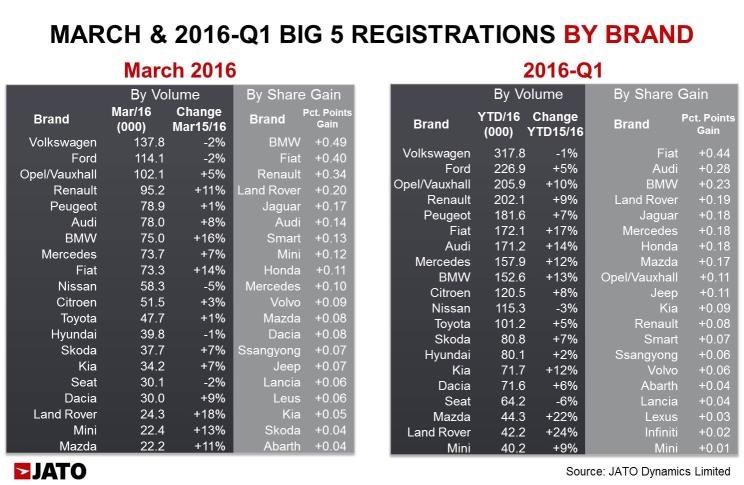 Although the rate of growth has eased in March, Carlos Da Silva, manager of IHS Automotive's European light-vehicle sales forecast has said that it was not a big surprise.

He explains that the reasons are mostly technical due to Easter falling in March this year and resulting in some markets posting far weaker sales.

However, when using seasonally adjusted data the trend remains strong in with no real sign of abatement.

In addition, he adds that the first quarter ended with growth on the strong side, which is particularly notable given that Q1 2015 was already when in to a recovery trend.

As for the wider picture, there is little change in the factors which are helping the region as pent up demand continues to be released in all markets, he said.

While corporate and fleet sale activity remains the engine of growth in most markets, while greater support is coming from private buyers that suffered worst, such as Southern Europe.

Da Silva said: "Interestingly - and hopefully - private demand seems on the verge of coming back also in those markets that were still shy on private demand - Germany, France - which is certainly indicative of better things to come."

However, and unsurprisingly, tactical sales – those made to rental fleets and registrations by dealers and OEMs – have started to slow down which indicates less need to artificially sustain volumes.

Although these are positive hints for the remainder of the year, this does not mean that the risks have finally disappeared. Da Silva notes, far from it.

"The global economy – and emerging economies in particular – still looks quite fragile, while in Europe, the influx of migrants and security crisis are still open questions, as is the integrity of the EU in general as the UK public are given the opportunity to vote on its membership in a referendum due to take place in June.