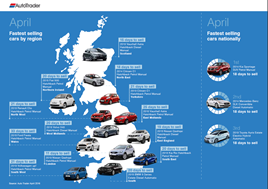 The Kia Sportage proved the UK’s fastest-selling car for a record second month in a row, according to data published by Auto Trader.

The Korean-built SUV has once again proved it is the UK’s fastest selling car and the seventh quickest car to shift out of the showrooms in April.

As in March, the Sportage enjoyed selling success as a new and used model, with the model proving to be the ninth most popular new car on sale in the UK.

Most popular among the Sportage models is a 2014 petrol model with manual transmission, which took an average 18 days to sell in April.

“The 2014 version of the Sportage is well-equipped and owners are very happy with them according to Auto Trader’s owners’ reviews with a score of 4.4 out of five, a level of satisfaction aided by the long-running warranty provided by the manufacturer.”

Sweeping into second place is the Mercedes-Benz SLK Convertible, perhaps heralding the appeal of the coming summer as buyers switch their attention to drop tops.

This particular version, which takes just 18 days to sell, is the diesel automatic revealing that prospective owners could be looking for frugal, wind-in-your-hair motoring.

Toyota’s Auris Estate moved into the third spot as it made its debut in the top ten, with alternative fuel vehicles representing the biggest growth of all the fuel types in April’s new car registrations, up over 26% year-on-year.

In all, there are five different body styles represented in the UK’s top 10 fastest selling cars including convertible, people carrier, estate and hatchback.

It is the crossover or SUV, however,that is proving the most popular with four of the top 10 coming in this body style.

The 2013 BMW X1 in diesel auto format ranks as the fifth quickest to shift off the UK’s forecourts, while another Korean-built SUV, the 2015 Hyundai ix35 with petrol power and manual transmission, is the sixth quickest.

Both it and the X1 took 20 days from appearing on the forecourt to finding a new owner.

Edwards-Smajda said: “Across the regions we have seen just how popular the crossover is with the Nissan Qashqai the fastest selling car in the East of England and London, plus it enjoys another 13 spots across the UK regions top 10 quickest selling cars.

“The Qashqai’s smaller sibling the Juke is also proving popular with five top 10 positions across the different regions.”