The UK saw Europe’s third lowest growth of 2% against a total market up 8.9% year-on-year according to JATO Dynamics’ report on the region's new car registrations for April.

New car registrations in the 29 European markets covered by JATO Dynamics show that the current positive sales trend continued during April, with 1.32 million units sold – 108,000 units more than the total recorded in April 2015.

But only the Netherlands (1%) and Switzerland (-2%) experienced less growth than the UK market.

The YTD volume for the 29 markets totalled 5.25 million cars, which is 8.3% higher than total registrations between January and April 2015.

SUVs continued to dominate the market, counting for 24% of total registrations, up by 2.6pps compared to April 2015.

Volkswagen lost 0.8% of its market share during April – the largest of any brand – with growth of 2.4% which was behind the regional average. Its SUV registrations were particularly hard-hit, falling by 13%.

Around 12% of total registrations in April were for Volkswagen cars, however, which continued to lead the entire market thanks to the Golf, Polo and Passat.

Felipe Munoz, global automotive analyst at JATO Dynamics, said: “The slowdown in growth posted by Volkswagen has not stopped overall growth as consumers continue to move to other mainstream and premium brands. SUV demand is also part of this shift.”

April was again led by the Volkswagen Golf in the model ranking with 49,000 registrations representing a 2% rise in volume over April 2015.

Elsewhere in the segment, others registered negative a reduction in registrations: Renault Clio (-7%), Ford Fiesta (-16%) and Opel/Vauxhall Corsa (-9%).

The success of Renault’s Captur came on the back of improved registrations in France, Germany, Belgium, the UK and Switzerland.

JATO said that this could be explained by the rise in popularity of new direct rivals such as the Hyundai Tucson and Renault Kadjar.

The Tucson was the 23rd best-selling car in Europe during April and managed to control more than 1% of total. The Renault Kadjar, meanwhile, closed the month accounting for almost 1% of total European car registrations.

The third model to post the highest market share gain was another SUV – the Mercedes GLC. This D-SUV managed to get very close to the popular Audi Q5 and Volvo XC60, outselling the BMW X3.

Other winners include the new Audi A4, which jumped from fourth place in the D-Segment ranking in April 2015 to second position last month thanks to a +61% increase. This Audi was the best-selling premium midsize sedan/SW during April.

The new Fiat Tipo compact sedan also posted an important result with 4,700 units sold, or 1.75% of the C-Segment registrations.

Munoz said: “The latest new model launches appear to be going down well with consumers, and this is helping to boost the new car market as a result. In particular, the appetite for SUVs remains as strong as ever.” 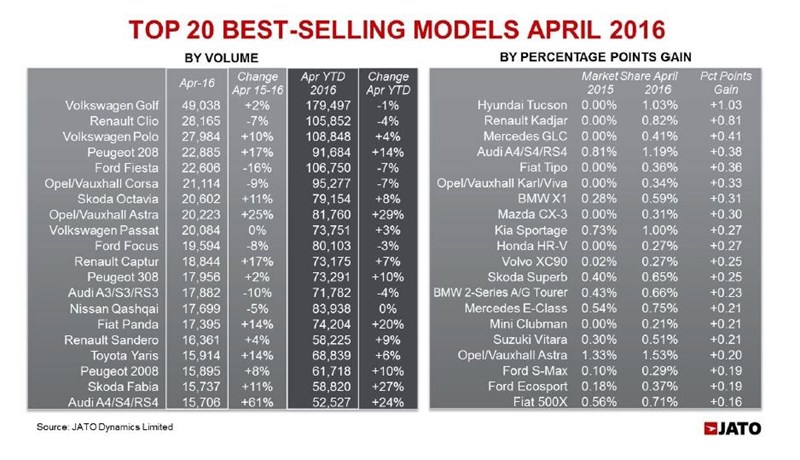