Ford’s Galaxy sales proved out of this world in September’s used car market, positioning it as the fastest selling car of the month in Auto Trader’s rankings.

> The fastest selling used cars in your region

Joined in the top ten by the brand’s Kuga SUV, the 2012 Ford Galaxy with diesel engine and automatic transmission took just 12 days to sell during September, proving that the seven-seat people carrier was in high demand.

The Sportage was the fastest seller in the UK for two consecutive months in March and April 2016.

The 2014 version with petrol engine and automatic gearbox took just 18 days to sell. 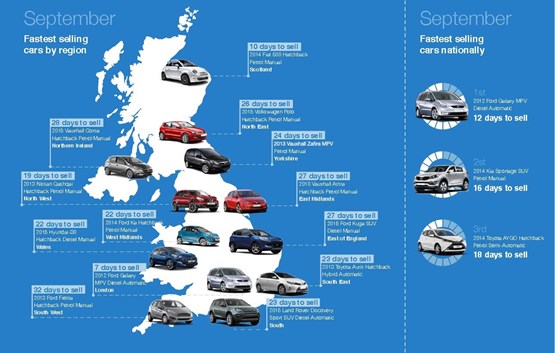 “While September has proved a strong month for used Fords, knowing which cars will prove popular is key to identifying future sales opportunities.

“Retailers utilising data tools are much better set to understand which used cars are in demand in their area and how to maximize the speed of sale.

“Our research shows that retailers using i-Control benefit from an average days to sell of 26 compared to a market average of 66 days in September.”

Ford’s Kuga was seventh fastest out of the UK’s showrooms while in four of the UK regions it was a Ford model that was quickest to sell.

That included East England where there were five models with the Blue Oval badge in the region’s top ten fastest selling cars, including the 2015 Ford Kuga Diesel Automatic that ranked first with an average of 27 days to sell.

“Over 69,000 of those were driven away by new 66-plate owners last month, equating to a new Ford sold every 15 seconds.