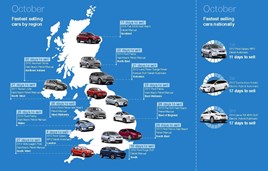 Two hybrid vehicles made their debut in Auto Trader’s ranking of the UK’s ten fastest selling cars as the Ford Galaxy MPV secured its pace at the top of the pile for the second month in a row.

The Galaxy was the quickest off the country’s forecourts in September and has repeated the same feat in October, with diesel-engined models with an automatic gearbox taking an average of 11 days to sell in October – an improvement of one day over September.

Toyota’s 2013 Auris Estate with hybrid petrol engine and electric motors secured second place alongside the Lexus RX450h hybrid-powered SUV, which were both tied on 17 days.

It is the first time that two hybrid petrol/electric cars have appeared in Auto Trader’s top ten fastest selling cars.

Karolina Edwards-Smjada, Auto Trader’s retailer and consumer products director, said: “It’s clear how popular the Ford Galaxy is clocking up its second consecutive month as the UK’s quickest set of wheels off the forecourt.

“It’s also the first time in 2016 we have two hybrid cars in the UK’s top ten fastest sellers with the Toyota Auris estate and the Lexus RX450h proving to be the second and third fastest cars out of the showrooms.”

Paul Van der Burgh, president and managing director of Toyota GB, said that the emergence of the Auris and RX450h in the top ten was a clear indication of changing buyer trends and increasing confidence in the benefits of hybrid motoring.

He said: “We see the appeal of hybrid accelerating in new car sales and here we see clear evidence of that trend in the used market.

“With over a million Toyota and Lexus hybrids sold globally every year customers are reassured about the reliability and strong residuals of hybrid models, clearing the way for them to enjoy the quiet and smooth driving experience common to all hybrids, big or small.”

Ford’s Fiesta and Focus hatchbacks made more than a further 50 appearances in the regional top tens. 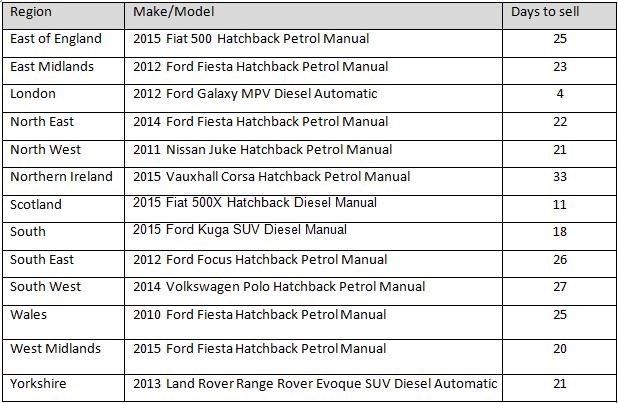