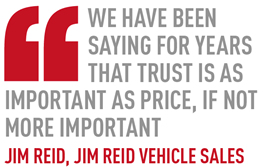 Car buyers believe that trust in the dealer and value for money must go hand-in-hand to win their loyalty in the used car market.

A YouGov poll of 1,433 people who have previously bought a used car found that the key factors that would cause them to return to the same dealer for their next car were value for money and trust.

However, many used car buyers remain fickle if they see the opportunity to save some cash. A third were “fairly likely” or “very likely” to abandon their trusted dealer if they found the same make and model of car somewhere else for less money, which will be welcome news for dealer groups, such as Pendragon and Cambria Automobiles, which have plans to rapidly grow their used car revenues. However, almost the same proportion said they were not likely to be tempted to stray, and slightly fewer had no opinion.

The survey also found that most buyers are in the market for a used car priced between £5,000 and £15,000, which fits well with many franchised dealers’ stock policies. However, there is a strong opportunity in cheaper, older used cars if a dealer group is willing to take the risk. 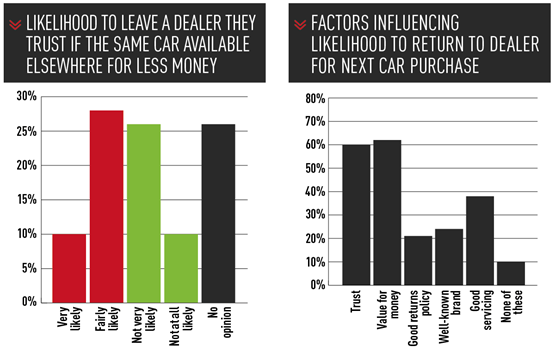 Buyers typically take their time to buy ‘the right car’, which again may help dealers seeking conquest sales. Almost a third of respondents took up to a week to find their chosen car, and another quarter took between a week and a month.

The research also found that only 21% of respondents ended up buying the car they originally had in mind. Of all respondents, 26% ultimately upgraded their expectations and bought a car more expensive than they originally planned.

The survey was commissioned by Carsnip, with the aim of exploring the need for trust in the buyer’s mindset. 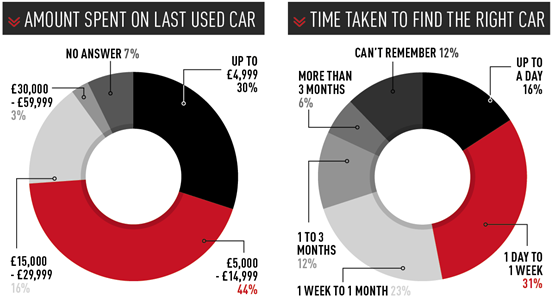 Alastair Campbell, Carsnip chief executive, said: “We wanted to challenge that frustrating cliché that says used car salespeople can’t be trusted. Our research shows that they can, and in fact when it comes to the holy grail of repeat business, trust breeds loyalty.”

Campbell said trust takes time to develop and this is where the most digitally savvy dealers are winning, by focusing on driving customers to their websites as early as possible, and then positioning themselves as the experts throughout the buyer’s journey.

realised that trying to engage earlier in the buying process is important. We invest heavily in our website and online customer experience.”

“We have been saying for years that trust is as important as price, if not more important,” said independent dealer Jim Reid of Jim Reid Vehicle Sales.