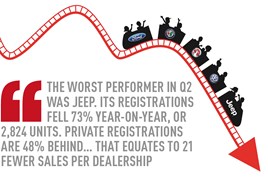 New car registrations dropped for 80% of the UK’s car brands in the second quarter of 2017.

Only eight brands managed to record a year-on-year rise in their Q2 new car registrations. After carmakers applauded themselves for a record March market, during which 28 brands posted Q1 growth as consumer offers and dealer incentives pulled sales forward, the rollercoaster has plunged downwards again to leave Q2 10.4% down on the same period in 2016 (580,270 units vs 647,712 units).

Luxury sports car buyers tried to offset the market’s decline. Aston Martin’s registrations were up 75%, or 144 units, as its new DB11 reached showrooms, while demand for Lotus increased 45%, or 24 units, thanks to a revised Elise two-seater and special editions such as the Sprint. A 13% uplift at Porsche, which has a recently refreshed Cayman on a £379 monthly payment PCP offer, equated to an extra 434 units too.

These relatively small successes suggest the new VED regime, which came in at the start of Q2 and ramped up the annual road tax bill for cars priced above £40,000, has not deterred all consumers.

However, many manufacturers have blamed a pull-forward of registrations, plus uncertainty in the build-up to the general election, for a faster-than-expected drop in sales.

Other economic data suggests consumers have begun to rein in their spending – Visa’s UK Consumer Spending Index reported that household spending recorded its weakest growth since 2013 in Q2, with outlay on transport, communication and recreation in decline as people shifted spending towards the essentials.

Business advisers PwC warned that consumer spending will continue to be squeezed for at least 18 months by falling living standards and creeping inflation, which is running at a near four-year high of 2.6%, according to the Consumer Prices Index.

Credit Suisse has predicted that the UK’s economy will enter recession near the end of this year as consumer spending and business investment weakens while the UK’s relationship with the European Union remains unclear.

At BDO, whose latest Output Index showed business confidence among businesses  falling to a four-year low, partner Peter Hemington said: “Since the financial crisis, the UK’s economic recovery has been reliant on consumer spending and a growing services sector. For the past two years now, we have witnessed both a decrease in the performance of the services sector, as well as a reduction in consumer spending, which has become more pronounced after the devaluation of sterling.”

This also coincided with exchange rate shifts during Q2, from €1.18 to the pound to €1.14 by the end of June. This would make a €20,000 car almost £600 more expensive, if national sales companies had no hedging in place.

The worst performer in Q2 was Jeep. Its registrations fell 73% year-on-year, or 2,824 units, and its private market demand has suffered significantly: to date, its private registrations are 1,378 units, or 48%, behind the same period’s result last year. That equates to 21 fewer sales per dealership.

To get a fast-start in the second half of the year, Jeep has been offering a £2,250 test drive incentive on top of its existing discounted finance offers for vehicles ordered before the end of July. However, even this does not make it particularly competitive, due to abysmal guaranteed future values. Jeep’s website highlights a representative 48-month PCP on a Renegade at £21,665 list price, which works out  at £289 per month with a £5,886 optional balloon payment. However, the same car is available, pre-registered, on Jeep dealer websites for below £15,000, so a buyer on hire purchase could pay perhaps £30 per month more over the same period and own the car at the end of it.

DS is another brand suffering a much faster decline than the overall market, possibly due to a lack of competitive products and offers. According to SMMT data, its Q2 registrations were down 53%, or 2,217 units. The core DS3 hatchback alone was down in retail demand by 42%, or 671 registrations, while the less popular DS4 dropped by 88%, or 534 units, in the fleet market, where it has performed strongest since its launch 18 months ago.

In pure volume terms, the largest drops involved the two brands at the top of the market. Ford achieved 13,503 fewer registrations than it did in Q2 2016, a drop of 17.5%, while Vauxhall suffered similarly, with 12,161 fewer Q2 registrations, a drop of 21%.

A delve into Ford’s data shows it was hardest hit in the retail market. Registrations to private customers in Q2 fell back by 22.7% or 7,673, while its fleet orders dropped 13%, or 5,830 units. The market-leading Fiesta, under run-out ahead of its replacement’s arrival in July, took a 31.8% hit in volumes in the retail market during the second quarter, and a 9.9% drop in fleet, which has negated Ford’s huge push of the supermini back in March.

Some uplift in fortunes is likely during the third quarter of the year, as manufacturers restore some of the balance, but the market is expected to drop a little further. The Society of Motor Manufacturers predicts the total industry volume will reach 2.62 million cars by the end of this year, which would be 2.6% below the 2016 total.