Domestic demand and exports dipped in August as UK car manufacturing experienced a 5.4% fall in production volumes, according to the SMMT.

Year-to-date performance down with production so far declining -1.9%, the SMMT reported today.

Mike Hawes, SMMT chief executive, said: “It’s common to see fluctuations during the summer months, as output varies according to the timing and duration of holiday factory shutdowns.

“However, the continuation of the longer term downward trend in domestic demand is a concern for production across the UK so it is vital for the future health of this sector that the current uncertainty around Brexit is removed and consumer and business confidence restored.” 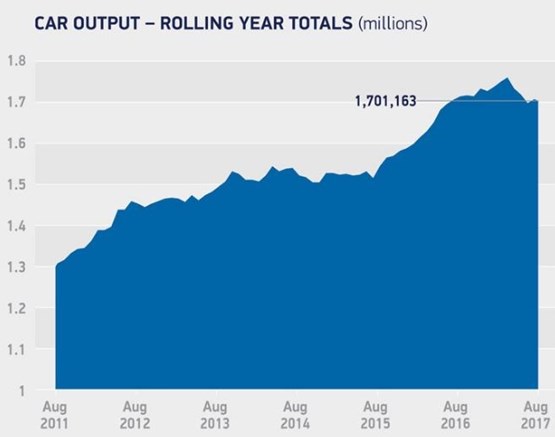 Yesterday AM reported that Euler Hermes had forecast that UK car sales will fall 5% this year and a further 6% in 2018.

Overall, growth across the global automotive market is also slowing, it said, despite growth in China and India helping sales reach an anticipated 100 million total by 2020.

Ludovic Subran, chief economist at Euler Hermes, said: “New vehicle registrations are expected to grow globally by 2.1% this year, as Europe is on the mend and manufacturers worldwide are making cars “cool” again.

“However, this is only half the growth of 2016. New registrations in the US and UK have declined while used-car sales boom and China stopped tax breaks for car sales earlier this year.”