UK car manufacturing ramped up 7.8% in July as the number of vehicles produced for the domestic market rose 17.7% ahead of the September ‘plate change.

A total of 136,397 new units rolled off UK production lines according to figures released by the Society of Motor Manufacturers and Traders, as manufacturers ramped up production for new and existing models in the month ahead of summer factory shutdowns. 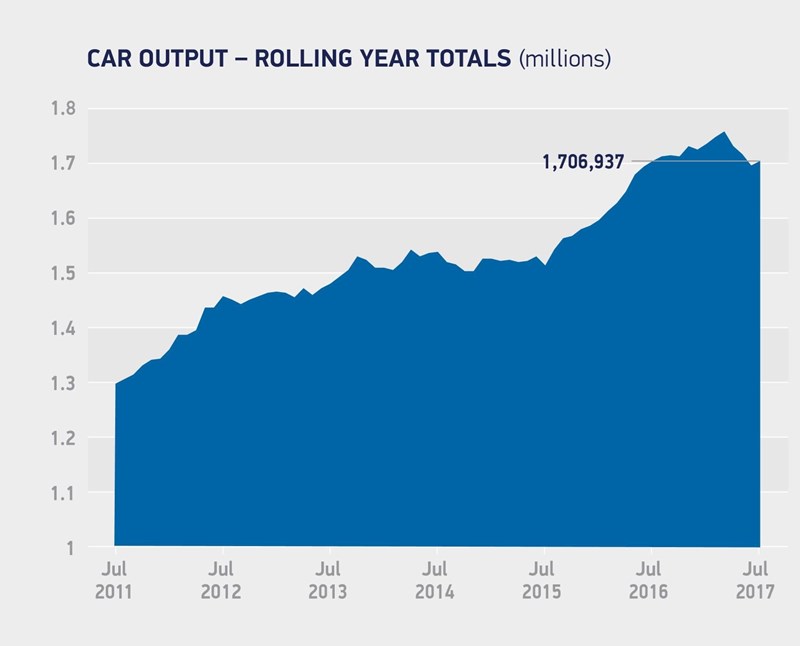 July’s increase in production numbers follows seven successive months of decline and a 13.7% decline in the number of cars being manufactured in the UK during June, a result which caused the SMMT to revise its target of producing two million cars a year by H2 of 2020.

“As the timing and length of these manufacturing pauses can shift each year, market performance comparisons for July and August should always be treated with caution, but as long as the economic conditions at home and abroad stay broadly stable we expect new car production to remain in line with expectations for the rest of 2017.”

While the domestic market caused the bulk of the July production increase due to operational considerations and the September ‘plate change, exports grew by 5.3%.

Cars made for overseas buyers represented nearly 80% of output in the month with 106,525 units shipped abroad, compared with 29,872 which stayed at home.

Year-to-date new car production has now passed the one million mark, the SMMT claiming that this showed “a slight dip” of 1.6% compared with 2016 which was, it said, was “in line with expectations”.

Since January, overseas customers have taken delivery of 78.8% of new cars made in Britain, with UK manufacturers now exporting cars to more than 160 different countries around the world.