The SMMT has blamed uncertainty surrounding the future of diesel cars and a Brexit-induced hit to consumer confidence for a 9.3% slump in new car registrations during September.

The SMMT’s communications director, Tamzen Isacsson, referred on Twitter to preliminary figures revealing a bleak outlook for the end of Q3.

Isacsson’s Tweet said: “New car market down over 9% in Sept now at around 426,000. Confidence falls with ec and pol uncertainty + confusion over air quality plans.”

Demand for alternatively fuelled vehicles continues to accelerate, up 41%, while petrol fell 1.2% and diesel suffered a 21.7% slump. 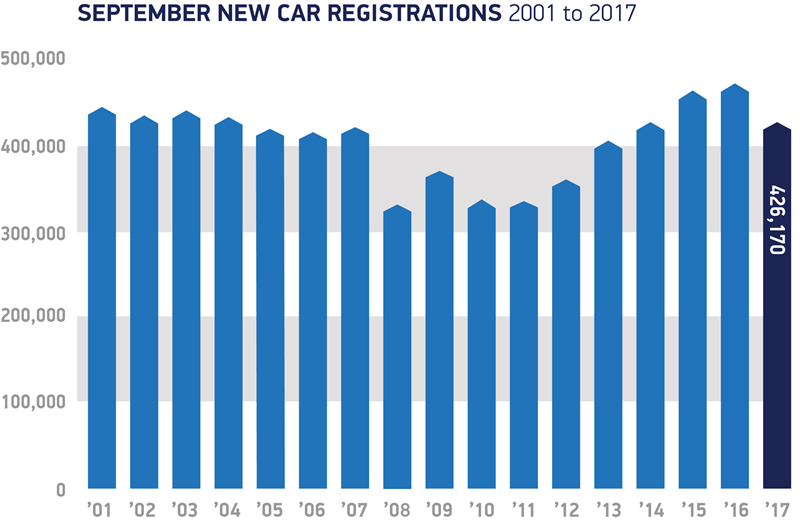 Mike Hawes, SMMT chief executive, said: “September is always a barometer of the health of the UK new car market so this decline will cause considerable concern.

“The confusion surrounding air quality plans has not helped, but consumers should be reassured that all the new diesel and petrol models on the market will not face any bans or additional charges.

“Manufacturers’ scrappage schemes are proving popular and such schemes are to be encouraged given fleet renewal is the best way to address environmental issues in our towns and cities.”

The fall in new car registrations is the seventh in succession and comes despite a bid by manufacturers to boost sales in the face of anti-diesel publicity with a series of scrappage offers for consumers.

Discounts ranging from £1,350 to £7,000 are being offered by many brands, with most offers open to the end of the year, in a response to concerns surrounding NOx emissions and expected changes to legislation surrounding diesel cars expected to be announced in the chancellor’s autumn statement.

The SMMT argued that consumers' turn away from new diesel model could actually serve to thwart the ambitions of both industry and government to meet challenging EU-imposed CO2 targets.

It said in a statement: "If new diesel registrations continue on this negative trend, UK average new car CO2 levels could actually rise this year, the first time such an increase would have occurred since average CO2 emissions were recorded (in the year 2000)."

NFDA director, Sue Robinson, said: “Consumers walking into the showroom need more clarity on issues such as diesel and air quality. We are working closely with car retailers to assist them in educating their customers.

“Consumers also need to feel confident in the economy when embarking on high value items such as motor vehicles.

“On a positive note, the used car market has shown incredible signs of resilience which can partly offset the current decline in new car sales.

“As we enter the final quarter of the year, we expect the UK new car market to continue to perform at these levels.”

Meanwhile, registrations fell across all body types except dual-purpose, which grew 2.4%.

The biggest declines were seen at opposite ends of the market with both luxury saloons and superminis falling -36.4% and 21.2% respectively.

Chris Bosworth, director of Strategy at Close Brothers Motor Finance, was among the first to offer comment on the SMMT UK monthly automotive registration figures for September. He said that it appeared the motor industry was “struggling to shake off the impact that Brexit uncertainty is having on consumer spending”.

Bosworth added: “We are already seeing the consequences of the weak pound on UK manufacturers’ profit margins, and this has made it difficult for dealers to offer customer deals, especially the 0% finance offers which would have been abundant in previous years.

“The past six months has been a turbulent time for the motor industry with France, quickly followed by the UK, banning the sale of petrol and diesel cars by 2040.

“This is one of the most radical government policies affecting the automotive sector in recent memory, and the shake up is having an effect.

“Buying behaviour towards fossil fuel cars is changing as motorists lean towards leasing deals rather than purchasing the vehicle outright.”

James Dower, senior editor of Cap HPI's Black Book, said: "While the new market remains at a historically high levels with over 2 million vehicles registered this year, we believe it is on track to be more reflective of its true size rather than a forced market.

"As the market returns to a more natural size we will see fewer new and used vehicles, which will drive more stability in used market. We also expect to see more profitability for dealers due to lower volume expectations through 2018."

Simon Benson, director of motoring services at AA Cars, said: “As Mike Hawes pointed out, the number of new car registrations in September tends to be a good measure of the overall health of the market.

“However, we’re not entirely surprised to see sales drop off in September as new car registrations have declined each month without fail since April when the vehicle excise duty tax changes came into place.

“Sales of both diesel and petrol vehicles took somewhat of a beating last month, but this presented a strong opportunity for alternatively-fuelled vehicles, with registrations in this section of the market up by more than 40% in September.

“The government’s plans to ban the sale of new diesel and petrol cars by 2040 will likely have impacted new registrations, while wider economic uncertainty will have also affected consumer confidence.

“September now marks the sixth consecutive month of declining sales, and we’d expect to see a similar trend continue until the end of the year.”

“There's no doubt that the new diesel car market is being destroyed by diesel scrappage schemes and upcoming toxin taxes - sales down by more than a fifth is an incredible drop for such a short period of time.

“And with Brexit fears likely to keep hampering consumer confidence in the short term, the new car market has a fight on its hands to recover. It feels like this combination of negative forces will keep kicking the market hard when it’s already on the floor.

“What can be done? Well the industry seems to be sticking its head in the sand. The electric and hybrid car markets do offer rays of hope, but the Government needs to think about incentivising consumers to buy them if it wants to reverse the current market trend.

"Instead, recent policy decisions have done nothing other than to help force diesel cars off the road, just as the market needs a catalyst for growth.”

Anthony Keohane, director in the automotive and roadside division at Colliers International, a global real estate advisor, said: “9% is high but in reality, sales are only 3.9% down over the whole of 2017 to date, so the situation is not as concerning as is being reported.

“There are some general economic issues which are causing some downturn in sales however the confusion over the future of diesel cars, which I don’t think has been clearly explained, is not helping matters. This is an issue that the government and the manufacturers need to clarify and publicise more clearly.

“Last year, there was a push to register cars to meet targets so the high figures that were reported masked the true sales numbers. 2016 sales weren’t fully representative of the sector as they reflected a large number of pre -registered vehicles. A number of our clients have reviewed their strategies and it would appear that the dealers are now more focussed on profits and less about chasing the registration numbers.”