New car registrations grew by 5.4% across Europe during August 2017 as the UK suffered a 6.4% fall for the same period, according to figures published by Jato Dynamics.

Jato said that Poland’s strong economic performance is the reason behind this boost to its car market and it is clear that this growth will continue.

Felipe Munoz, Global Automotive Analyst at Jato, said: “August is usually a quiet month for car registrations and our data shows that the average monthly sales for August in the last five years were 31% lower than the total monthly average.

“The summer holidays clearly have a lot to do with this. Italy is the market which is most impacted by the summer, as its economy more or less stops in the second and third weeks of August.

“This affects all brands who sell cars in Italy, but particularly those who rely on the market the most, such as Fiat, Alfa Romeo and Jeep, who all sold lower volumes.

“Other markets that are similarly hit by the summer include France, Croatia, Portugal, Greece and Spain. Not every country experiences this August lull though, in fact, both Romania and Norway have seen their average registrations grow in August by 34% and 2% respectively.”

The break-down of Jato's findings, by country, can be seen here: 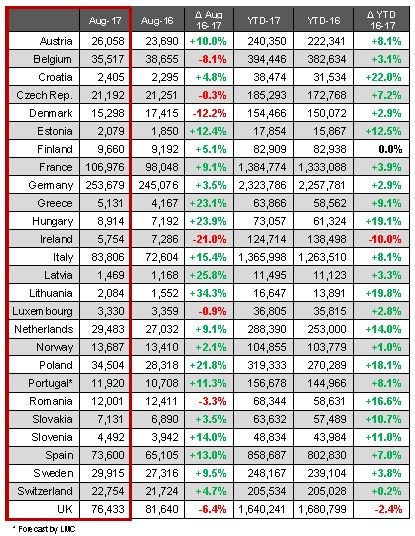 Volkswagen maintained its lead in the Europe-wide market, despite losing 0.6ppts of market share.

The Volkswagen Golf experienced positive growth for the month.

Europe's top performing cars are detailed in the table below: