Stringent emissions testing could be a catalyst for a golden age of innovation in engine and battery design but banning diesel is set to have a “boomerang effect” on CO2 rates, Jato Dynamics has warned.

Jato’s latest white paper, entitled ‘the future of the car industry as WLTP bites’, explores the effects of the new Worldwide Harmonized Light Vehicle Testing Procedure and highlighted the positive effects and pitfalls for both consumer and car manufacturers.

While the market analyst suggested that the new testing regime would kick-start development of new vehicle drivetrain solutions it said that the cost of motoring is likely to hit consumers in the pockets as manufacturers face fines as a result of a failure to meet EU emissions regulations under the new regime.

The white paper said: “Jato’s analysis suggests that WLTP testing will mean that it will be exceptionally difficult for car makers to adhere to the EU’s 2021 target to get the fleet average emission down to 95g/km of CO2. This is because the fleet target was based on NEDC testing.

Jato said that cars that had been re-tested under WLTP show a tangible increase in NEDC correlated values, versus those obtained under the NEDC test regime, with a disparity that was “turning out to be greater than expected”.

The white paper warned that there was also a very real threat that legislation to clamp-down on the use of diesel vehicles across Europe could have the adverse effect of raising CO2 emissions across the continent if manufacturers and consumers do not make sizable strides towards EV adoption.

After highlighting the strengths of a diesel power plant in meeting consumer expectations for power and torque, while emitting low levels of CO2, the report stated: “Banning diesels to reduce PM (Particulate Matter) and NOx due to declining popularity could have a boomerang effect on CO2 rates, unless an alternative propulsion system is available soon.” 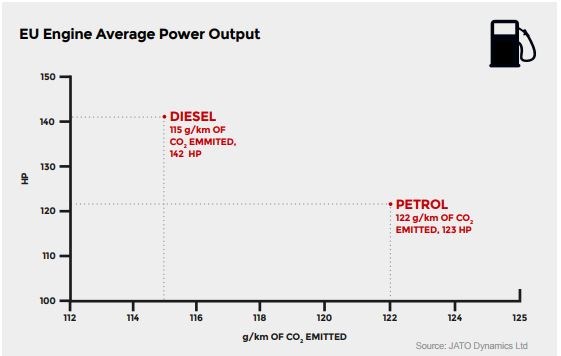 Jato highlighted concerns surrounding the National Grid’s capacity to cope with widespread EV adoption, however, and suggested that “48 Volt mild hybrid technology could bridge the gap between internal combustion engines”.

Such a system has been introduced to the new Mercedes-Benz S-Class and utilises a vehicles starter motor to act as a supplementary motor, so the vehicle can accelerate more quickly.

Jato conceded that such systems offer a limited driving range – serving rather as a boost to the engine’s power output – but concluded “The technology could clearly help automakers to reach the 95g/km limit in just two years”.